For this month’s next entry for Genre Grandeur February – Coming of Age movie’s, here’s my 2nd of 4 reviews. This time I chose American Graffiti (1973).

Next month’s Genre, chosen by Anna of Film Grimoire will be Latin Director movies. To participate, send me your review to latin@movierob.net by 25th Mar. Thanks to Anna for a great and diverse choice. 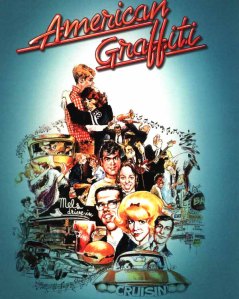 “We’re finally getting out of this turkey town, and now you wanna crawl back into your cell, right? You wanna end up like John? You just can’t stay seventeen forever. ” – Steve

Brief Synopsis – On the night before two of them are about to go away to college, a group of friends decide to cruise the streets once again for the final time together.

My Take on it – This is the movie that proved to everyone that George Lucas was a great writer and director and had the ability to transport us all to a different time and place and make it all seem so real.

The characters are all great and the choice to use relatively unknown actors was a great one. It’s great seeing Ron Howard, Richard Dreyfuss, Cindy Williams and Harrison Ford before they all became famous.

This movies feel and themes was a big part of the inspiration of the Tv show Happy Days and its easy to see so many elements that recur in both.

The soundtrack is amazingly chosen and Lucas expertly used the voice of Wolfman Jack to make it all seem like it was just playing on the radio.

Bottom Line – Movie that proved Lucas knew what he was doing as a writer and director. Love how this was the inspiration for Happy Days. Great cast of relatively unknowns that mostly went on to bigger and brighter projects. Excellent soundtrack and production that transports us back to the early 1960’s. Highly recommended!

MovieRob’s Favorite Trivia – The film was shot in sequence, so as filming went on and the actors grew tired from the shooting schedule, the characters they played would also look more and more tired as the night went on.   (From IMDB)