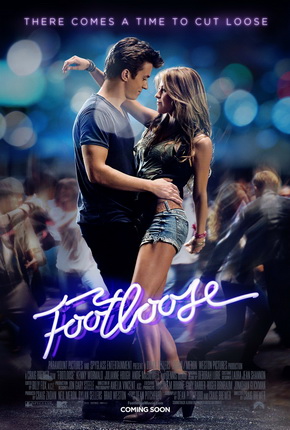 This month’s Genre was chosen by Justine of Justine’s Movie Blog and she chose Coming of Age Films as the Genre for February.  Thanks Justine!

[Dusting himself off after bus crash, in singsong voice] “The wheels on the bus go BOOM, BOOM, BOOM!” – Willard

Brief Synopsis – After an orphan moves to a sheltered Southern town to live with his aunt and uncle, he begins to question why music and dancing is banned in the town.

My Take on it – I can’t understand for the life of me why Hollywood feels the need to remake successful movies.

This remake took the exact same story, characters, situations and songs and just re-filmed them with new actors.

The performances are nowhere near as good as in the original and the songs that are re-done with new singers just don’t feel as catchy as they did 31 years ago when I saw the original in the theater.

There doesn’t seem to be any added value to this remake and if you have the urge to watch it, I strongly, strongly recommend that you watch the Kevin Bacon version instead!! You’ll like it much better, I can almost guarantee that…almost

Bottom Line – This movie was a complete waste of time and money. Why make a remake 27 years after the original when you have nothing new to add?  The story is identical to the original and the performances are inferior.  The music is good, but the covered songs just don’t sound as great as they do from their original artist.  Watch the original!!!!

MovieRob’s Favorite Trivia – Kevin Bacon was given the script, but could not find a role he was willing to play. One particular role originally written for him was Ren’s deadbeat father. However, he gave director Craig Brewer his blessing. (From IMDB)

Genre Grandeur Worthy? – Not at all, watch the original. This was a complete waste of a remake that might have been good if the original didn’t exist.