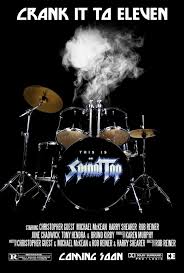 “This pretentious ponderous collection of religious rock psalms is enough to prompt the question, ‘What day did the Lord create Spinal Tap, and couldn’t he have rested on that day too?'”- Marty DiBergi

Brief Synopsis – I this mockumentary, a filmmaker interviews a famous British Rock Band while following them on tour through the US

My Take on it – This is one of the few Rob Reiner movies that I never saw and didn’t quite understand the hype before I saw it.

When watching this now, the idea of a mockumentary is not at all novel, but taking into consideration that this movie helped create the genre 31 years ago gives it an entirely new perspective.

The cast is great and they are all hilarious because their characters are not trying to be funny in any way, shape or form.

The fact that I have never really been much of a fan of hard rock music, a lot of the real life musical references went right over my head, but it was enjoyable nonetheless.

How many people noticed the cold sore joke??  The funny thing is that I heard that the explanation to it is in a deleted subplot.  You can read about it on the IMDB trivia if you’re interested.

Bottom Line – Great spoof on how rock bands are perceived and act both on and off camera. Is usually credited with creating the mockumentary genre. Great cast with some hilarious scenes. Some scenes were lost on me by not being the biggest fan of rock n roll of the 70’s. Recommended!

MovieRob’s Favorite Trivia – After the film opened, several people approached director Rob Reiner telling him that they loved the film, but he should have chosen a more well known band to do a documentary on.  (From IMDB)