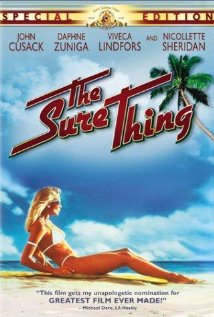 For today’s first review of The Sure Thing (1985), here’s Reut of Sweet Archive with her opinion of it.

What an appropriate selection for Valentine’s Day. I realize it’s only posted today, but I did watch on February 16th, which makes it 2 days after Valentine’s so it still counts.

Walter Gibson (John Cusack) is a whimsical college student who claims he lost his charm with women. His best friend, Lance (Anthony Edwards), is trying to convince him to come to California, promising him to score with a beautiful girl who’s a sure thing. Gibson, Gib for short, meets lovely and slightly nerdy Alison (Daphne Zuniga) and likes her immediately. He tries to get a date by convincing her to help him with his studies. When that attempt fails, Gib takes Lance’s advice and decides to go to groovy Cali to meet this sure thing. Coincidentally, Alison has to meet her boyfriend in LA, so the two end up sharing a ride which becomes an eventual road-trip which leads to… (I shamefully took this three dots thing from IMDB).

The story here is a simple one and very charming. A boy meets girl, he likes her but she doesn’t like him at first until she discovers his kind heart and loves him right back. We have seen this scenario many times before (Can’t Buy Me Love, Some Kind of Wonderful, Say Anything, etc.). That’s what I love about the 80’s teen flicks. There’s not a lot of room for confusion, only the anticipation that love will finally happen whether in the school’s corridors, the college dorms, or the accidental road-trip and there’s always a cool soundtrack that follows.

John Cusack is wonderful in 80’s flicks. I love that era of his. His character, Gib, is extremely cute and funny and has this capturing boyish attitude that makes any girl fall for him (Alison, are you blind??). He doesn’t come from money, unlike Alison, who carries a loaded credit card, but and manages to keep his gentleman demeanor at all costs. A funny fact is that at first Reiner refused to cast Cusack for this film as he was 16 and under-aged. When Reiner finally auditioned him he was unable to give the part to someone else (Anthony Edwards was also considered for the lead role). Cusack had to declare emancipation in order to take the lead.   I really liked Alison, the mature brunette beauty who refuses to fall for Gib’s wooing attempts. She’s well played by Daphne Zuniga. Alison is portrayed as the exact opposite of the blonde bodacious and seductive Sure Thing played by (then unknown) Nicollette Sheridan. I imagine that was the grand purpose of the film. She’s cool and collected, highly focused and a sheer perfectionist and only lets herself lose it when enduring Gib’s careless behavior.

It really doesn’t take a genius to figure out what happens in the end. It’s a familiar tune, as I mentioned before. However, I feel as if The Sure Thing had taken a slight turn from the usual 80’s teenage romances. The issue of sex and love is dealt with much more maturity here, and the communication between Gib and Alison is more age advanced. Cusack and Zuniga had wonderful chemistry on set and it’s fun to experience the love/hate relationship between those two up to the point of the last and much anticipated kiss. My only down point I is that in the last scene we’re transitioned too quickly to the kiss. It’s almost as if Reiner couldn’t have waited to finish shooting already.

I’m glad I got the chance to review this film. This film is light and fun and contains many humoristic bits which never grow old. The Sure Thing received many critic praises and a high rating of 89% from Rotten Tomatoes.