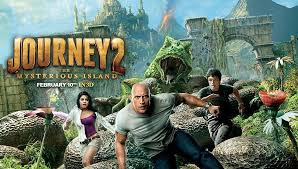 Brief Synopsis – When a kid gets an encoded message from his grandfather, he and his step father set off on an adventure to find the mysterious island where his grandfather is located

My Take on it – After seeing the original movie, I was intrigued to see what they would do with the sequel.

Once again they based the story on a Jules Verne idea so the general concept was done well.

One of the main faults in this movie is its attempts to add too much humor into situations which detract from the thrilling aspects.

The special effects are better here than in the original which could be attributed to a larger budget or just advancement of technologies in the interim 4 years.

Unfortunately Brendan Fraser chose not to return for the sequel because he’s a much better actor and leading man than The Rock.

I’m definitely intrigued to see if they actually make the third movie which seems to have a great concept.

Bottom Line – Nice adventure but not as good as the original because it tries too hard to have comical moments. The special effects are superior to the ones from the original. Unfortunately, The Rock isn’t a better leading man than Brendan Fraser and it shows.

MovieRob’s Favorite Trivia – The original Jules Verne story “A Journey to the Centre of the Earth” (1864), on which the preceding movie Journey to the Center of the Earth (2008) is loosely based, never had a sequel. However, another Jules Verne story “20,000 Leagues Under the Sea” (1870), did have a sequel, called “The Mysterious Island”, which was released in 1874 and followed five American men stranded on an island in the South Pacific, which is similar to a plot point in this movie. (From IMDB)