For today’s first review of Alex & Emma (2003), here’s Ryan from Ten Stars or Less with his thoughts on it 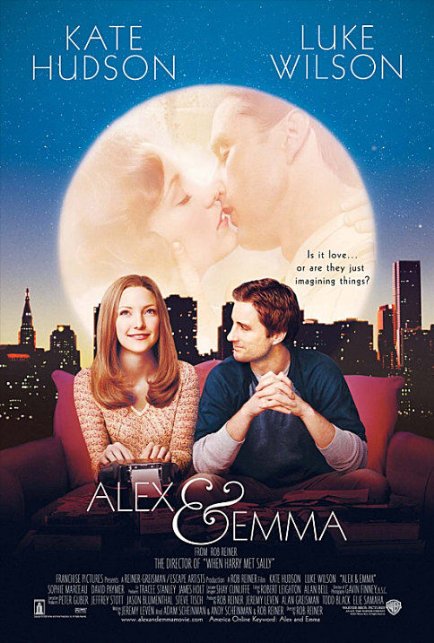 movie summary: Sometimes people just get down on their luck. In the case of brilliant writer Alex Sheldon (Luke Wilson), gambling and writer’s block will get him deep with some loan sharks who want their money in 30 days or he’s a dead man. In an attempt to speed up the process Alex hires a beautiful stenographer named Emma Dinsmore (Kate Hudson) to write his book as he thinks it up. They spend the next 29 days together debating and arguing the story as it unfolds while trying to brush aside any feelings they have for each other. Things look to be going according to plan when the book gets finished on the 23rd hour of the 29th day, but all is not well when Emma finds out Alex’s darkest secret.

my thoughts: I can’t believe I waited so long to watch this movie. It was really slow at the beginning and I wasn’t sure I would like back and forth story within a story plot. What really hooked me here though was the ending which I thought was really charming. It may have been really predictable but it was so cute that I fell for it and considered it a bow tie on a really nice gift.

Luke Wilson never gets the movie projects that his brother Owen does and that may be for good reason. Maybe Luke likes to take on lesser known roles, characters that require thought, emotion, and feelings. That’s the kind of character Alex is here. He’s a brilliant best-selling author who has made some poor decisions with money and the wrong people, all in the name of love. No one would have ever guessed it, but all of his best work comes from heartbreak. When he hits a wall writing his next book, he’ll try his best to use life experiences as framework for his characters and story. Filled with a heart of gold, Alex just wants to find a girl who will like him for him and not his fame or lack of fortunes. The character he creates, Adam Shipley, is a regular guy back in the 1920’s who will go out of his way to impress the girl of his dreams. While trying to win over the impossible girl, he’ll overlook the beautiful girl right in front of him who could and would be everything he wants. Life imitates art here and Alex finds himself in the same situation when Emma steps into his world.

As charming as Wilson is here, Kate Hudson steals a lot of his thunder as Emma Dinsmore. She is a down on her luck kinda girl who just works her job and collects a pay cheque. Emma is single and hasn’t met the right guy, which is a blessing for Alex, but a curse for Emma. While Alex reads his book out loud to her, she begins to grow impatient because she wants to know how the story will end and questions him around every corner. She’ll push him to his limits to dig deeper into his characters and want him to think about the direction of the story, that sometimes the right thing isn’t always the right way. Emma allows Alex to grow on her because despite his really dumb decision-making, is a nice guy who is looking for the same things she is. There is a connection between them that took some maturing but showed all the signs of blossoming into something beautiful. Like some other famous directors, Rob Reiner makes a few appearances in the film as Alex’s publisher. His role in the end was fantastic and had me laughing out loud as he set the stage for Alex and Emma to reconnect.

I won’t go into much detail here because I don’t want to ruin the story, but while Alex creates his story we get to see how it plays out firsthand. Thanks Reiner’s vision for cinema, we are taken back to the 1920s to witness Andy’s struggles to win over the beautiful Polina Delacroix (Sophie Marceau). You can tell there was not a lot of money in the budget to make the setting as realistic as possible, but Reiner and his crew do a great job of portraying life and the styles back then. Like I mentioned before at first glance I thought the bouncing between fantasy and reality was going to suck and that I was going to shut this off. Instead the book storyline was interesting enough to fuel a romance between Alex and Emma which was a major selling point to this story. They needed each other in one way or another and through his ability to tie real life events into a fictional story (with her approval/disapproval), was able to get what he needed to have a clean slate and realize what he has right in front of him. 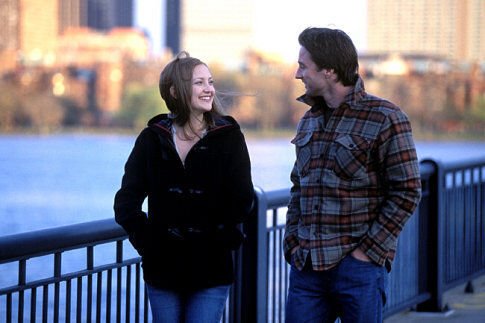 my final thoughts: Alex & Emma will not be a hit for everyone. There will be some who hate the predictability of the story and its characters, while others will consider the events in the film to be charming. We have seen Kate Hudson and Owen Wilson kiss many times in other movies but she has great chemistry with his brother Luke. It is a refreshing take on finding true love, love at first sight, and finding love under unique circumstances. I’d be happy to watch Alex & Emma again even if I wasn’t the biggest fan of the back and forth story of the book and real life.