For this month’s next review for Genre Grandeur – Latin Directors, here’s a review of Gravity (2004) by Alex of Alex Raphael

Thanks again to Anna of Film Grimoire for choosing this month’s genre.

Next month’s Genre has been chosen by James of Back to the Viewer.  We will be reviewing our favorite movies featuring a dystopian world (past or future). Please get me your submissions by 25th April by sending them to dystopia@movierob.net  Try to think out of the box! Great choice James!

Let’s see what Alex thought of this movie. 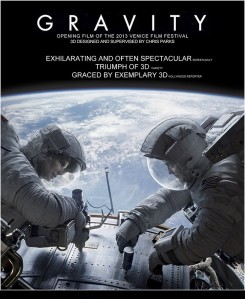 When talking about a really good film, it’s easy to get distracted by a fantastic cast, incredible leading performance, provocative storyline or even a shocking twist. What is less talked about is just how stunning a film can look.

And with Mexican director’s Alfonso Cuarón’s 2013’s voyage into space with Gravity, the visuals really are something to behold. For so much of the hour and an half running time, you are reminded just how beautiful the world is from the other side of the clouds.

It is not surprising that of the ten Academy Award nominations, (seven of which went on to win), Best Original Screenplay was not among them. The story is not hugely complex. Sandra Bullock plays Dr Ryan Stone, aboard the NASA space shuttle Explorer, who faces major difficulties when debris from a nearby Russian missile strike on a defunct satellite causes huge damage to her shuttle. Largely on her own, Stone must make the repairs in time to return to Earth.

With such a small cast, and with Dr Stone by herself in most scenes, the ageless Bullock does a great job in carrying the film. She is perfect at expressing the sense of fear and panic, the struggle to gain control of the situation and the devastating thought of not seeing her daughter again. There’s also a nice turn by George Clooney as Lieutenant Matt Kowalski, an astronaut separated from Dr Stone after the crash.

Winner of Best Picture at the Oscars and top of most critics’ lists for that year, Gravity also attracted a fair amount of publicity, mostly for the amount of scientific inaccuracies within the film. I’ve always found the joy of science and technology to be that they enable us to see a creative version of the future. It may not inspire other films to be so imaginative, but in reminding us what film is visually capable of, the beautifully shot Gravity really is out of this world.