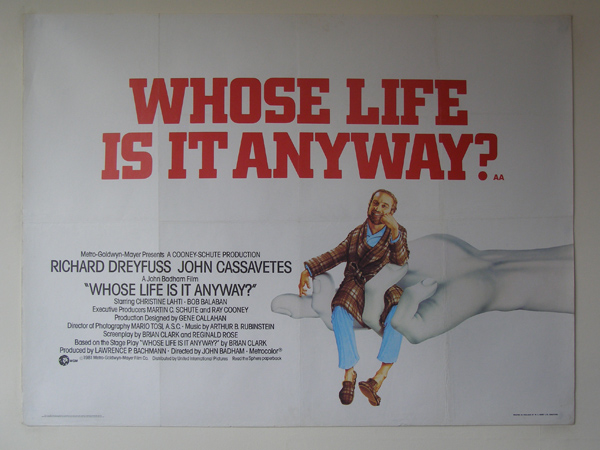 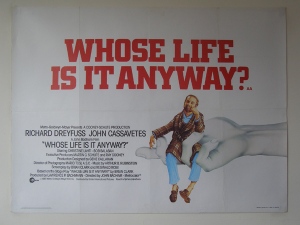 Brief Synopsis – After a sculptor gets paralyzed in a car crash, he must fight with the hospital administration to allow him to die

My Take on it – Suicide is a theme heavily debated on many grounds whether it be for religious, moral or even financial reasons.

This movie (based on an award winning play) takes the subject and presents us with both sides of the story for a man who after being paralyzed in an accident feels that there is nothing left for him in life and that it should be his decision what happens to him.

Richard Dreyfuss gives an amazing performance that was somehow completely ignored by all of the major Awards.

Being that the theme of the movie is a very heavy subject, it was refreshing to hear the jokes and humor of Dreyfuss’ character because it helped lower the mood in those scenes.

The idea of this movie is not to be either pro or anti suicide but rather to make us all think about what we would do if we were ever in a similar situation.

The arguments for both sides are quite strong which makes this movie worth seeing no matter your personal viewpoint.

Bottom Line – Very powerful theme of suicide that is thoroughly debated by both sides. The protagonist’s sense of humor injects a welcomed lightness in a very heavily themed film. Dreyfuss is amazing here and I’m surprised that he didn’t at least get a nomination for this performance. It doesn’t matter what side of the suicide argument you stand on, this is a movie that will definitely make you think. Recommended!

MovieRob’s Favorite Trivia – Richard Dreyfuss was considerably ill during most of the shoot. He would only be able to film at least 2 to 3 hours at most and would be sent home for the rest of the day. People have stated that it was caused by his heavy drug use at the time and one of the reasons he does not remember that even participated in this film despite his great performance.(From IMDB)