For this month’s next review for Genre Grandeur – Dystopian Movies, here’s a review of Nausicaa of the Valley of the Wind (1984) by Kim of  Tranquil Dreams

Thanks again to James of Back to the Viewer for choosing this month’s genre.

Next month’s Genre has been chosen by S.G. Liput of Rhyme and Reason.  We will be reviewing our favorite fantasy/sci-fi animated movies (non-Disney or Pixar) . Please get me your submissions by 25th May by sending them to animated@movierob.net  Try to think out of the box! Great choice S.G.! 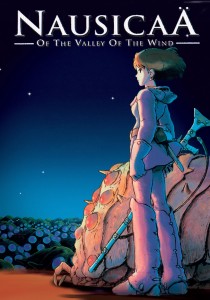 Over a thousand years has past since the “Seven Days of Fire” has destroyed the world.  Human civilization can now only survive in certain areas where the wind helps keep the toxic air out.  Everywhere else is covered with what is called the toxic jungle along with its enormous and sometimes deadly insects that wander it.  Princess Nausicaa lives in one of these areas called The Valley of the Wind where the wind from the sea is able to create a safe haven for its people.  While other civilizations want to destroy the toxic jungle in order to rebuild the Earth as well as create war against each other, she believes in seeking out the real reason why the toxic jungle is in fact poisonous and hopefully find a way to be at peace.  However, when the Tolmekians end up in The Valley of the Wind and she learns of their war with Pejite, she gets caught in between and struggles to try to gain peace between not only the two warring nations but also the planet. 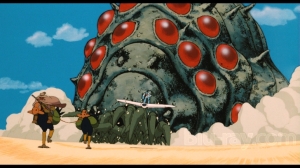 I’m a huge Hayao Miyazaki fan.  I grew up with these movies and to me, they are classic.  Miyazaki is a great storyteller and his animations carry strong messages about the world we live in and for that, there is an incredible amount of heart in each one.  Nausicaa of the Valley of the Wind was one of his first animations and also one that featured one of the best dystopian futures.  It focuses on how mankind’s pollution has caused the world to collapse and nature to fight back.  It not only created the toxic jungle to push humans out of survival but also reminds us that its important to find balance and peace with nature in order to survive and give it the respect it deserves. 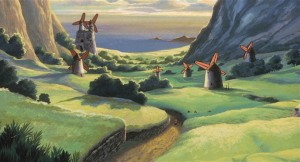 The world that Princess Nausicaa lives in pretty awesome.  Not that the situation itself is cool.  But rather, the thought process in the design of say the plants living in the toxic jungle.  They are absolutely pretty.  While, the insects are gigantic and yet they also have a lot of creativity put into their design.  The creatures emote just like humans do and especially in the case of the “ohm”, the creature with a million eyes on its shell.  The Valley of the Wind itself is a beauty showing the contrast of peace and balance just with the little help of the Wind the flows through. 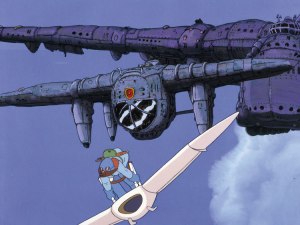 As with almost any Studio Ghibli animations, Nausicaa of the Valley of the Wind may be from the 1980s but it is still visually beautiful.  The details in its characters and the surroundings are mesmerizing.  The story itself holds a strong message about the environment and nature.  However, in a Dystopian world like this one, Princess Nausicaa is still hopefully just as the people in the Valley of the Wind for the most part is as well.  While the story gets caught up a little sometimes with the Pejite and Tolmekian war going on, when its really just a catalyst for revealing how the world can turn around easily and be mean and ugly, the real gem is our on-screen heroine here.  Princess Nausicaa is a deep character and its hard to not love a princess who is equally bad-ass as a warrior but deep down she is a pacifist who hopes to save the toxic jungle and understand her environment more to save it. She feels and she’s not invincible plus she’s incredibly intelligent.  Who doesn’t love a heroine like that?

I can praise Nausicaa on and on.  It holds a special place in my heart.  As a dystopian movie, its created one that is relevant even more to the world we are living in now making this 1980s animation’s message even stronger.  With a great heroine in Princess Nausicaa and a unique story set in a well thought out dystopian future, Nausicaa and the Valley of the Wind with its beautiful animation is an awesome dystopian movie and thats the reason why its suitable for my pick for Genre Grandeur.

Have you seen Nausicaa of the Valley of the Wind?