For this month’s first review for Genre Grandeur – Animated Sci-Fi/Fantasy (Non-Disney/PIXAR) Movies, here’s a review of Quest For Camelot (1998) by Steven of Past Present Future TV and Film

Let’s see what Steven thought of this movie:

On Second Thought: “Quest for Camelot” 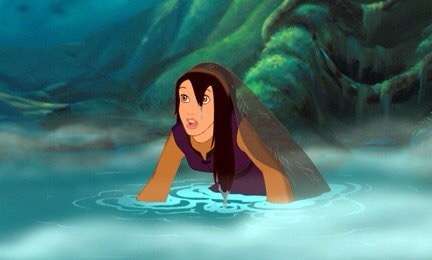 We love some animated films because we saw them time and again, as children. The various aspects of each individual film stuck in our minds for one reason or another. As time goes on we have developed a love for a film that did the one thing it was meant to, entertain us as children. Now, most likely as an adult, or simply a person that’s aged several years, can an old animated film, some we deem classic, be just as good as we’ve allowed ourselves to believe?

The Warner Bros. Pictures film “Quest for Camelot”, is magical and musical and that’s all you can really say.

The film was directed by Frederik Du Chau (“Underdog”, “Racing Stripes”) and written by Kirk De Micco (“The Croods”, “Space Chimps”), William Schifrin (“The Fairly Odd Parents”, “T.U.F.F. Puppy”), Jacqueline Feather (“Kung Fu Killer”, “Son of the Dragon”) and David Seidler (“The King’s Speech”, “Kung Fu Killer”). It is based on the novel “The King’s Damosel” by Vera Chapman.

The film originally opened on May 15, 1998. It would go on to be nominated for one Academy Award, one Golden Globe Award, winning one, and two Annie Awards.

Like any person who had a childhood, there are some films that stood out and became a favorite. Some people probably kept on watching them many years after they left the age ranges that qualify them as children, then teens, and young adults. I was sort of this person, up until I grew my DVD collection too much and my own movie watching habit became out of control. Then, as it turns out, these films that I “loved”, just sat on a shelf, gathering dust. I guess I shouldn’t have waited so long to see this film, and so many others.

I’m going to start with what’s arguably the best thing about this film. The songs. Being a product of the ‘90s there’s got to be musical moments in the film, that in any other film, would be down right silly. Don’t get me wrong, some of these musical numbers are in fact silly. This film’s songs have stuck with me for the last 17 years, because they were that good. Maybe not all of them, but the ones I truly like. “On My Father’s Wings”, “The Prayer”, “Looking Through Your Eyes”, and “I Stand Alone”, are particularly memorable. Even now I wish the soundtrack was easily accessible. I must say that if it weren’t for these songs, and even “If I Didn’t Have You”, I probably would care very little for this film.

The animation, as I’m still discovering for a lot of these older films, is okay. I can’t describe it any other way. I get a lot of it was still being hand drawn (I believe this one was), and that there’s different styles to give each studio a different look and feel, but that doesn’t make it any less weird and meh. How ‘bout we leave it at that.

The characters are the next thing that hold up this film, even if it’s overall plot is a bit dull. Sorry, it is. The two main, and only interesting characters, Kayley and Garrett, are fine. You like them. There’s romance, and a bit of comedy from the adventure, but, and this I’m sad to say, there’s not much to get you truly invested. The two head dragon (Cornwall and Devon) are there to purely bring out even more comedy. They’re the sidekicks! Every film’s gotta have a sidekick. Amusing characters, yes, but irritating at the same time.And I almost forgot about Bladebeak! He’s got his moments too. The others serve the overall plot and that’s it. They’re the motivators for our central characters.

Even with very little keeping me interested all these years later, I believe that the combination of fun, silly antics, and the singing makes for a pleasant experience. I know, I even find it hard to believe as I, at some point, found watching this kind of like a chore. A painful one. Still, at least there are the songs that will forever move me in some way. Only the really good ones can live outside the place they originated.