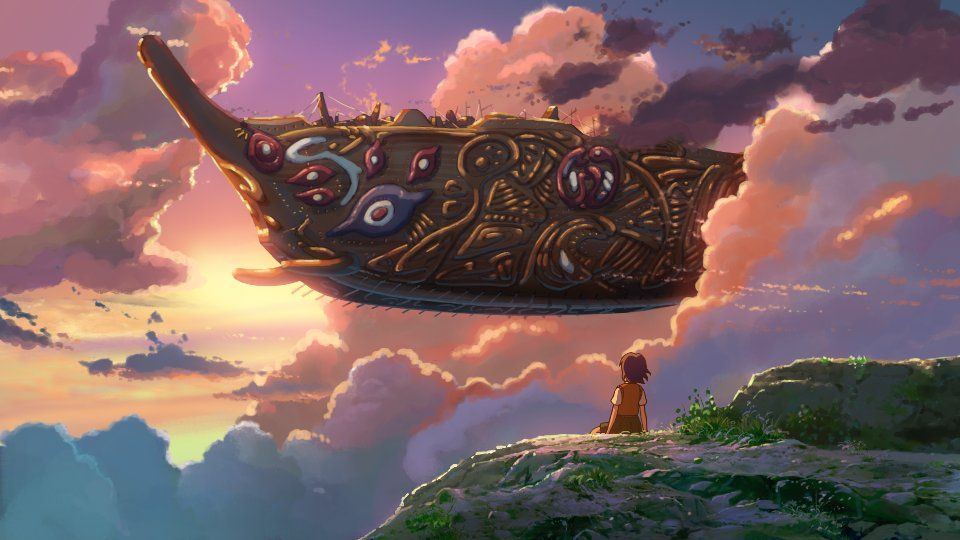 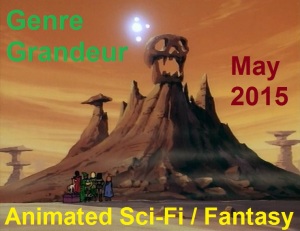 For this month’s final entry for Genre Grandeur May – Animated Sci-Fi/Fantasy (Non-Disney/PIXAR) Movies, here’s a review of The Children Who Chase Lost Voices (2011) by S.G. Liput of Rhyme and Reason who chose this month’s genre for us all.

This month we had 18 review for GG:

In addition, I watched and reviewed 5 additional movies from this genre for my Genre Guesstimation series.  Unfortunately, none of them will be now included in my own favorites of the genre.

Asuna wanders on her own

To play her father’s radio

And hears a dying song alone

That’s echoing from far below.

A monster and a set of twins,

A man who pines for what is lost—

A quest with lines to not be crossed.

To deep Agartha, they descend,

Where wishes can consume a friend

And pilgrims learn to say goodbye.

Makoto Shinkai is a mixed bag. On the one hand, the Japanese director created one of my most despised movies, 5 Centimeters Per Second, a pointless and boring exercise in failed romance. On the other hand, his very next film was this one, which happens to be one of my new favorite anime films. Not only is Children Who Chase Lost Voices twice as long as his previous effort, but it features far more action, emotion, and complexity.

The story follows young Japanese schoolgirl Asuna, the kind of seemingly perfect daughter who cleans the house, earns straight A’s, and never seems fazed, even by tragedy. When she runs into a killer Pokémon thing (known as a Quetzalcoatl) and befriends a mysterious boy named Shun, she’s caught between the glorious underground world of Agartha and a covetous secret organization, as well as a rogue member with personal reasons for exploiting Agartha’s mythological power.

Shinkai has been called the next Hayao Miyazaki, a title he didn’t seem to deserve until this film. While some reviewers have denounced it as a copycat of various Studio Ghibli films, Children Who Chase Lost Voices treads the line between rip-off and homage, even as it tells its own unique story. True, Ghibli fans will recognize certain similarities. Like Nausicaä of the Valley of the Wind, there’s an adorable cat-like sidekick, a race of misunderstood guardian creatures, a blind wise woman, and some talk of our polluted atmosphere. Like Castle in the Sky, there’s a militarist conspiracy, an ancient civilization now in ruins, a glowing crystal of enigmatic importance, and a long-armed monolithic creature reminiscent of both the Laputa robots and No-Face from Spirited Away. There’s also some elements of Princess Mononoke and Tales from Earthsea thrown in for good measure. Yet for all of these “borrowings,” the film has its own characters, its own fantastically realized world, and its own message, which it conveys in very subtle ways. The film also draws from various cultural and historical terms, such as the Mesoamerican Quetzalcoatl, Canaan, and Agartha (a “real” legendary city akin to Shambhala), to make its world more global in scope.

The film’s main theme is the challenge of letting go of those we love. Asuna’s chaperone through Agartha is Mr. Morisaki, a man unable to move on from his grief; though he remains sympathetic for most of the film, by the end it is clear that his dedication has become an obsession, and the choice to progress from it is not something he can do alone. Asuna’s own motivation is simple enough but carries more personal weight when considered in full context. Throughout the film are lessons of goodbye: to a spouse, to a parent, to a sibling, to a friend, to a pet, to a life now gone. Its most moving depiction is a small farewell scene during the climax that threatens to be swallowed up by the action around it, yet still managed to touch me more deeply than any of Miyazaki’s films (well, except for The Wind Rises).

Matching the depth of its theme is its gorgeous animation. Children Who Chase Lost Voices is one of the most visually resplendent animated films I’ve seen, with particular attention to the detail of light and shadow. It combines the glorious backgrounds from Shinkai’s other works with the softer, more appealing character designs of a Ghibli film to provide a true feast for the eyes. This movie proves I shouldn’t pre-judge a film based on the creator’s past work; one can still surprise you.

Like many other anime films, the ending is a tad rushed and leaves a few questions to the viewer’s imagination. It also barely addresses certain plot points, such as the fact that Asuna’s father was from Agartha. That might have been a spoiler, but it has hardly any bearing on the story. Even so, this is an ambitious film with moments of true wonder, such as the underwater passage to Agartha and the bizarre, rather frightening creatures that populate this hollow world. Some elements that may appear strange at first glance are subtly foreshadowed, such as the subtext of rebirth. Plus, the content of the film itself is thankfully restrained for the most part, aside from a brief but bloody scene early on.

Children Who Chase Lost Voices is a treat for anime fans, like a lost Ghibli project under a different name. Sometimes slow, sometimes heart-tugging, sometimes kinetic with action, sometimes astonishing with its world-building, it’s a layered fantasy that deserves much greater recognition.

Best line: (Shin, to Morisaki) “I heard a voice telling me to live, embracing the loss. You should have heard it too. It’s the curse that we humans must bear.” (Asuna) “But I think it’s also…a blessing.”