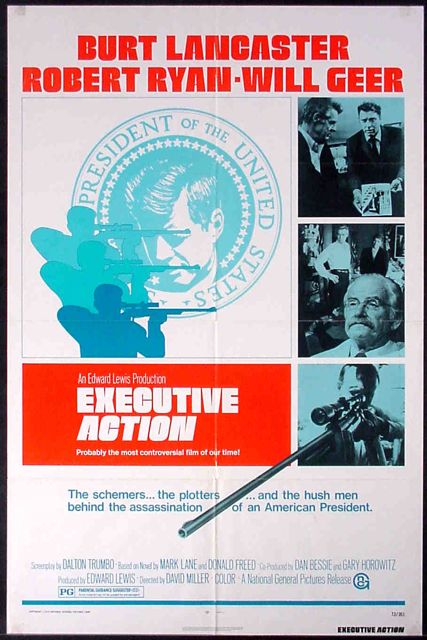 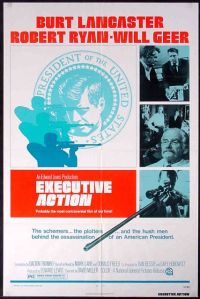 “In the three years after the murders of John F. Kennedy and Lee Harvey Oswald eighteen material witnesses died, 6 by gunfire, 3 by motor accidents, 2 by suicide, 1 by a cut throat, 1 by a karate chop to the neck, 3 by heart attacks, 2 from natural causes. An actuary engaged by the London Sunday Times concluded: On November 22, 1963, the odds of these witnesses being dead by Feb. 1967 are one hundred thousand trillion to one. ” – TV Commentator

My Take on it – Ever since I was a kid, I loved a good conspiracy theory and especially read quite a lot about the different possibilities of one (s) existing around the JFK assassination in Nov ’63.

This movie gives us a plausible possibility of what actually might have (or could have) happened on that fateful day 52 years ago.

Even now, this is known as a very controversial movie, but I found it extremely enjoyable and that is why I watch movies; to be entertained and enjoy myself.

Burt Lancaster, Robert Ryan and Will Greer are all excellent here and being as knowledgeable as I apparently am on that day, everything seems to fit in place nearly perfectly.

Being a huge fan of Oliver Stone’s JFK (1991) made me even more interested in how this was played out here.  I was so riled up about the event after watching this, I wanted to immediately re-watch JFK (1991) *I managed to do so two days later…review coming soon*

Unlike Stone’s version which runs 2 hours longer than this one, the 90 minutes shown here aren’t nearly enough to cover the whole story and I know I’m gonna have to re-watch this one in the near future just to try and absorb everything it has to offer.

I personally believe that Oswald couldn’t have acted alone, so they different opinions on what could have happened always fascinate me.

The quote above is further proof to me that something was going on back then, eventhough the quote was later retracted.

Bottom Line – Love conspiracy theory films and this one pieces things together so well that it seems quite plausible. Yes, it’s very controversial even now, but that doesn’t mean it can’t be enjoyable to watch. Great cast that make this scenario seem quite possible. Makes me wanna rewatch JFK (1991) soon (which I did two days later) 🙂 So much to take in, I’m gonna have to rewatch this one soon also. Highly Recommended!

MovieRob’s Favorite Trivia – Uniquely, this account of the presidential assassination is told completely from the viewpoint of the conspirators. (From IMDB)