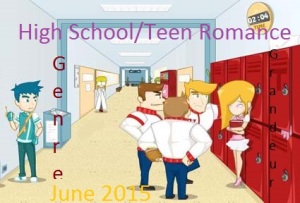 For this month’s next review for Genre Grandeur – High School/Teen Romance Movies, here’s a review of Pretty in Pink (1986) by Reut of Sweet Archive.

Thanks again to Kim of Tranquil Dreams for choosing this month’s genre.

Next month’s Genre has been chosen by Reut of Sweet Archive.  We will be reviewing our favorite dark comedies. Please get me your submissions by the 25th of July by sending them to darkcom@movierob.net  Try to think out of the box! Great choice Reut!

Every time I watch this Pretty in Pink I’m filled with great vibes and a strong need to saw.

Andie (Molly Ringwald) is teenage girl who doesn’t really fit in with the upper social clique in her high school. She lives on the other side of the tracks, as they say, with her unemployed father and her dog, ace. She works in this very cool record store to earn a living. Her best friend, Duckie (Jon Cryer, whom you might know from the T.V. show Two and a Half Men) follows her around like a lost puppy, trying really hard to keep his feelings to himself. When Andie falls in love with a rich preppie named Blane (Andrew McCarthy), things heat up as they both encounter strong resistance from their social circles. And then comes the prom…

Like many American high school movies, Pretty in Pink deals with social hierarchy. You have the freaks, the weirdoes, the metal-heads, the nerds, the punks, the cream of the crop richie kids, the athletes… phew. When two students get together, and they each belong to a different circle, ooohhh… it’s very unacceptable. It’s an 80’s high-school Romeo & Juliette. This is a matter well-presented under the cinematic giant wings of this wonderful director named John Hughes. He often deals with social inequalities and high-school bullying in his films, however, sugar coats them with great humor and heartwarming love stories, not to mention cool soundtracks. Pretty in Pink is his third movie in the “Molly Ringwald series” when the first two are Sixteen Candles (1984) and The Breakfast Club (1985). Two brilliant high-school movies that I’m absolutely in love with. This one is perfectly made because it’s completely not filled with unnecessary mannerisms. It’s pure and so accurate, and presents such an authentic story and characters (with one of them being my love, James Spader). It’s timeless. Watch this movie 40 years from now and it’ll still be relevant.

Favorite scene: Andie making a beautiful pink prom dress. A combination of her wacky record store bosses’ dress and the pink mess of a dress her father bought her… very sweetly, I might add. This scene is an inspiration!

I’m slightly biased when it comes to Pretty in Pink. Here’s an 80’s flick which I love very very much. This film almost represents my childhood and is partly the reason why I studied costume design. I mean, that sawing scene really did it for me for so many years. I love 80’s high school movies. Their all about love and romance and awesome songs and awesome proms and hideous outfits and over blown hairdos and AMAZING styles all around. No wonder this decade is so unforgettable… for better or for worse.