This month’s Genre was chosen by Reut of Sweet Archive and she chose Dark Comedies as the Genre for July.  If you want to still submit a movie, the deadline is 25 July. Just send it to me at darkcom@movierob.net 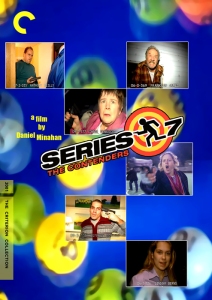 Brief Synopsis – In a world dominated by reality TV, things are taken to an extreme level where contestants must hunt and kill each other in order to win.

My Take on it – For the past two decades, I had always been an advocate against reality tv shows because I could never understand the draw.

3 years ago, I sat down to watch an episode of The Amazing Race and quickly got hooked on it.

In the interim, I have seen all 26 seasons of TAR (some even twice) and all 30 seasons of Survivor (also seen a few seasons twice), so I now can say that I do understand why people watch reality TV.

Besides these two shows, I steer far away from the genre and even laugh at most of the show concepts.

When I originally saw this movie on my birthday 12 years ago, I liked it but thought the concept was absurd and completely detached from the reality we live in.

Having now rewatched it after having a better understanding of how Reality TV works, I still admit that this is a very extreme concept, but I can also understand how Reality TV could possibly one day reach that kind of level.

Yes, this is a Dark Comedy, but they move the concept forward in such a way that it truly feels genuine.

Loved the way that this was filmed to mimic the way that Reality shows are done and that only added to the enjoyment.

Bottom Line – Great and scary concept that is taken to the extreme but doesn’t feel too far fetched based on the trends today.  Filmed like a real Reality TV show and feels like it could be genuine. Recommended!

MovieRob’s Favorite Trivia – The idea for this project came to Daniel Minahan after he worked for a reality TV show. (From IMDB)

Genre Grandeur Worthy? – Very close, it’s a great concept and although it takes thing to the extreme, it wouldn’t be so surprising to see this getting closer to happening one day and it’s funny in a very dark manner.