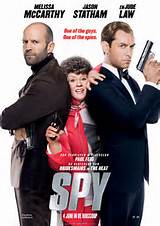 “Nothing kills me. I’m immune to 179 different types of poison. I know because I ingested them all at once when I was deep undercover in an underground poison-ingesting crime ring. ” – Rick Ford

Brief Synopsis – A CIA analyst is thrust into the spy game after a mole is discovered in the agency.

My Take on it – I must be honest and mention that I use to like Melissa McCarthy’s but lately I have gotten very tired of her kind of slapstick humor because it just feels like way too much.

That being said I thought that the idea to create a James Bond type of thriller with her as the central character was an interesting idea.

Unfortunately, most of the jokes fell flat and felt as if the same jokes and gags were being recycled over and over and over to a point where I couldn’t stand it anymore.

the same can actually be said about McCarthy’s work here. She starts off ok and then just gets more and more annoying that I also couldn’t stand her pretty quickly and wanted her to fail at her mission and end the movie.

Jude Law and Jason Statham both have the look and feel of the part of a superspy like James Bond, but neither work well in a comedic atmosphere and felt too out of their element here.

Bottom Line – Interestingly done spoof of a James Bond type of thriller, but the comedy felt too over the top for my taste. McCarthy is just too annoying and out of her element. Law and Statham both have the right look for their parts but neither work in a comedy like this one.

MovieRob’s Favorite Trivia – Reportedly, the film was inspired by the re-boot of the official James Bond movie series, with Casino Royale (2006) starring Daniel Craig, which writer-director-producer Paul Feig said to show-business trade paper ‘Variety’ ranks as one of his favorite ever movies.(From IMDB)