This next film, Absence of Malice (1981) is being reviewed by SG of Rhyme and Reason

Let’s see what SG thought of this movie…. 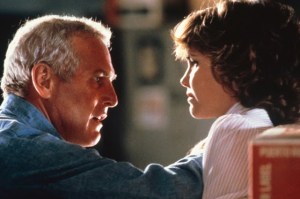 Does an interfering sleuth

Prefer the story that will sell?

These are debates they can’t dispel.

The news can rule the fates of men

With just the power of the pen.

In the search for truth, one may

Cause damage they cannot control.

Will the printer blameless stay

If pain attends their stated goal?

Do people have a right to know,

No matter what the “truth” may show?

Absence of Malice is a film that I expected to like, simply because of its two leads. Casting Sally Field and Paul Newman together seems like a dream come true, but while the film is a well-made twister, it didn’t quite reach its full potential.

The film delves into the dangers of preliminary inquiries, investigative overreach, and above all journalistic integrity or lack thereof. Its twists and turns certainly keep one’s interest, and I doubt anyone could claim they’d know exactly where all this intrigue would end. It all begins with reporter Megan Carter (Field) pointing an editorial finger at Michael Gallagher (Newman), thanks to a leak from a prosecuting Strike Force (led by Bob Balaban) which is investigating Gallagher in the hopes of exploiting his connections to the Mob. That’s a lot of information for one sentence; perhaps that’s why I don’t typically seek out films like this, since it’s easy for me to get lost in all the characters and who did what to whom. It only gets more complex from there, as conflicting ties cause Gallagher to lose quite a bit from this defamation, and he naturally seeks retribution. In some ways, Gallagher is like Michael Corleone if he had tried harder to stay separate from the family business, but as Gallagher suffers from continued slander and connects with Carter and others, we’re not sure exactly how clean he will remain in his search for restitution.

The film’s main moral struggle stems from the fact that most of the harmful actions are performed “absent of malice,” but does that necessarily make them blameless? In this case, “absence of malice” is dangerously close to “absence of sense.” Investigators flagrantly break the law because they believe they have cause. Reporters prove their own detached infidelity as they print things given in confidence, matters about which a faceless newspaper wouldn’t give a second thought, yet any decent human being should recognize their sensitivity. I suppose much of this comes down to the very nature of defamatory leaks and printing materials without the full story; newspapers can justify much of it legally, but that doesn’t make it any less wrong, based on the collateral damage.

You might wonder where the “courtroom drama” theme of this blogathon comes in, and for the first ninety minutes I was too. Eventually everything does come to a head with folksy Assistant Attorney General Wells (Wilford Brimley), though they specifically state that they’re not in a courtroom, making Absence of Malice an outsider among the others from this blogathon’s film list.

In the end, Absence of Malice is a good film sure to spark debate, such as how I believe one political character was victimized unnecessarily since he was blameless for most of the film. (My VC disagrees.) Yet for all of its ethically probing questions, it never comes off as more than a high-quality TV movie. Field and Newman likewise are both Oscar-winning actors, but there’s nothing remarkable about their performances here. Newman was still nominated for Best Actor, but Brimley manages to outshine both of them in his short cameo. While they add star power to the proceedings, the two actually suffer from a notable lack of chemistry. (I know it’s not just the age difference, since Field and James Garner were perfect together in Murphy’s Romance.) Absence of Malice may not have much of a wow factor, but it’s a respectable cautionary tale.

Best line: (Wells) “You had a leak! You call what’s going on around here a leak? Boy, the last time there was a leak like this, Noah built hisself a boat.”