This next film, A Time to Kill (1996) is being reviewed by Kieron of What About the Twinkie?

Let’s see what Kieron thought of this movie….

A Time to Kill review 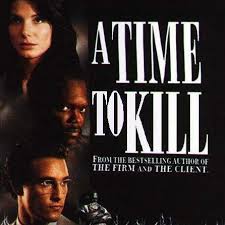 Back in 1996, Joel Schumacher directed one of the best American courtroom dramas to date. In between the bearable Batman Forever and the completely unwatchable Batman & Robin, Schumacher somehow found the time to direct a literal all-star cast in an adaptation of John Grisham’s novel A Time to Kill. The racially empowered drama hit some hard notes and was not necessarily an easy watch at times, but moved along at a brisk pace and contained a young Matthew McConaughey on fine form.

After a young black girl is brutally raped and beaten by two local rednecks, her father Carl Lee Hailey (Samuel L Jackson) attempts to hire hot shot lawyer Jake Brigance (McConaughey) to fight their case. Brigance soon informs Hailey there is a high possibility that the rapists will likely walk free. Seeking justice, Hailey confronts the pair outside the courthouse and guns them killing both. This one moment sets the scene for the rest of the film, as McConaughey’s lawyer agrees to defend Hailey in an otherwise unwinnable case.

Alongside McConaughey and Jackson is a fine cast, littering the film with performances worthy of any film. Sandra Bullock adds zest as a feisty and idealistic lawyer who agrees to help McConaughey in his defence of Hailey, while the pairs chemistry is palpable. Oliver Platt adds a charm and wit, while Donald Sutherland brings a sense of class to matters. The younger Sutherland, Kiefer, is all malicious intent as the brother of one of the murdered rapists and adds the nearest thing the film can class as a villain.

A Time to Kill sweats its way through the films 149 minutes, and continually finds a way to keep viewers hooked. The proceedings of the court case mixed with the small American towns racial tension and the renaissance of the Klu Klux Klan allow for fireworks to go off at anytime. And indeed they do, with A Time to Kill and its powder keg of emotions lending the film an unpredictable nature.

There are some faults however. The film is perhaps a bit too crowded in the acting department at times, making it feel overstuffed. It is also a tad predictable every now and then, with an ending that some will find overcooked. Nonetheless, A Time to Kill proves that Joel Schumacher is no hack director and that Hollywood can still make powerful stories when it wants to.

In summary: A moving courtroom drama, that asks no easy questions but is compelling viewing from beginning to end.