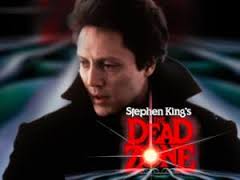 Mutant gave me a choice of any Cronenberg movie that I’d never seen. Fortunately, I found a movie based on a Stephen King novel that was able to rescue me from sheer terror of having to watch anything else of his (since as you probably already know, I’m not a fan of horror movies)

I lucked out on this one and I’m sure Mutant is pissed that I actually quite enjoyed one of her picks.

“If you could go back in time to Germany, before Hitler came to power, knowing what you know now, would you kill him?” – Johnny Smith

Brief Synopsis – After waking up from a coma following a car accident, a man begins to have visions of the future and tries to deal with it.

My Take on it – I am by no means a fan of horror movies, but since I have learned to enjoy many of Stephen King’s story that pertain to the supernatural and are considered more thrillers than horror, I have found myself over the years reading or watching some of his “tamer” stuff.

This is one that basically slipped by me and I knew nothing about it before choosing this movie from amongst all of Cronenberg’s movies.

Christopher Walken has always been good at creepy roles, so I assumed that this would lean farther into the genre pf horror than I’m usually comfortable with, but I decided to watch it anyway and persevere.

It turns out that this is one of his “lighter” kind of stories and deals not with horror monsters but with human emotions, visions of the future and loss of one’s past life due to an illness.

The story explores the psychological effects on someone waking up from a coma with new “powers” but keeps it all within the realm of normalcy.

Walken was great in this role and I enjoyed watching his show us so many emotions that his character was experiencing during this life changing episode of his life.

Tom Skerrit and Martin Sheen are both excellent in their roles as sheriff and politician respectively.

This movie brings up many philosophical ideas and questions and even 3 days later, I’m pondering different aspects of the movie over and over in my head.

One of these days, I’d like to actually find some time to read this book and perhaps even watch the show that was based on this idea that ran for 6 seasons with Anthony Michael Hall.

Bottom Line – Great idea for a story and I loved the mixture of the supernatural with psychological. Walken was great here and I loved the choices of Skerrit and Sheen in key roles.  I’m now quite interested in reading this book and possibly watching the long running USA series based on this book because the ideas brought forth in this movie are so intriguing to me. Highly recommended!

MovieRob’s Favorite Trivia – The Dead Zone was the first of several Stephen King novels and short stories that took place in the small town of Castle Rock. Others include Stand by Me (1986), Cujo (1983), The Dark Half (1993), and Needful Things (1993). (From IMDB)