This next film, JFK (1991) is being reviewed by Damien of Flashback/Backslide

Let’s see what Damien thought of this movie…. 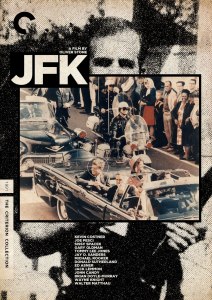 Back in high school I passed through a short-lived Oliver Stone phase. I had just finished a longer tour through Quentin Tarantino’s filmography when I picked up Stone’s trail with Natural Born Killers a film directed by Stone but conceived by Tarantino. My memory of the time is a bit foggy but I remember being hooked by Willem Dafoe’s crawling in Platoon, Val Kilmer on stage in The Doors, and the montages of violence in Natural Born Killers. It took me a few weeks to get my hands on the Blockbuster copy of JFK but the clerk assured me it’d be worth the wait. Maybe I should’ve waited a little longer. I don’t think I’ve watched a single Oliver Stone movie since watching JFK.

This movie is an imposing beast. From start to finish Stone captures almost pure exposition. A third of the characters and almost as many scenes find their way into the theatrical cut only to add expository dialogue (By the way the theatrical version stretches out to 188 minutes, and the director’s cut tops out at over 206 minutes. That’s just longer than The Lord of the Rings: Return of the King and a few minutes shorter than a double feature of The Cobbler). At the beginning this intel binge seems appropriate. The movie follows events that take place over a decade and finish twenty years prior to JFK’s 1991 release. Stone gorges on a wealth of information in his examination of the events leading up to John F. Kennedy’s assassination and the ensuing investigation. We’ve since seen movies covering historical controversies which usually favor a narrower lens than the one used by Stone. Whether or not a broad focus makes for better movies is a worthwhile but seemingly irrelevant question as movies habitually strip down history to reveal interesting bits and cut out the connective tissue. But JFK is all connective tissue. Like eyeing a massive turkey leg at the Texas State fair than biting into it only to realize that the leg is all (gross) tendon.

In a way, JFK is kind of amazing. Could you imagine, say, Christopher Nolan casting Leonardo DiCaprio in a three hour long, slowly paced political drama? Actually, swap out Clint Eastwood for Nolan and that pretty much describes J. Edgar (that movie was only two hours but it felt like four, so I’ll settle on the average). The point is that outside of the old epics, movies rarely follow an ambitious sweep through “real” history like JFK. Looking at J. Edgar, you can hardly blame studios for following this path. Only British biopics have a solid handle in the historic fiction genre nowadays (and their grip is firm) and the best in this genre usually follow a tighter course (think The King’s Speech vs The Theory of Everything). JFK’s court scene provides a bit of a climax and focuses the prior events but by the time it arrived I couldn’t care less about what happened. If it weren’t for excellent performances by Kevin Costner, Kevin Bacon, Gary Oldman, and many others, JFK would completely collapse under the weight of its ambition.

Bottomline: A movie with dozens of excellent moments that add up to an unsatisfying whole.