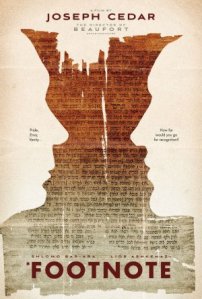 I realize that this movie is only 4 years old, but it always evokes so many memories from me when I think about it, I decided to include it in this series.

Due to the fact that I have worked in the field of academia for the past 18 years, (with a short hiatus in the middle, read yesterday’s NN for more on that) I understand certain aspects in movies that deal with Academics on a level that differs from most people.

This movie is one of those examples where that statement is quite true.

Most of you probably have never seen or EVEN heard of this Israeli movie that was nominated for the Best Foreign Language Oscar back in 2012.

I even have a few personal connections to the movie, its plot and even its Director Joseph Cedar which endear it even more to me.

First of all, my wife and her family lived a few blocks away from the Cedar family while they were growing up.  Their community was quite small, so the families knew of each other in passing.  The proof of this is that in the movie, my wife’s family name is mentioned in a list of names given by one of the characters.  The last name is not a common one like Jones or Smith, so it is obviously clear that it was from them.

Cedar;s father is a world renowned Biology Professor and Cedar himself has numerous connections and friends in the Academic community.  He even let some of them be extras in this film and it was so exciting trying to spot people I knew when watching this film.

The first time I saw this movie was on January 6th 2012 when my wife and chose went away for a weekend holiday.  On the way to the hotel, I surprised her and we went to a theater located not far from the hotel to see this movie.

Both she and I wanted to see this movie for months, but never had the opportunity.

Since it had been in the theaters for months by that time, the theater was empty besides us and another couple which made the experience feel even grander because we were essentially alone.

Being that the movie takes place in Jerusalem and the fact that it was filmed on location, I got to see many familiar places on screen which drew me in even more to the story and plot.

This is IMHO one of the best movies ever made about academics and I think about it often because of its relation to my work and of course due to all of the other personal connections to the film.

Cedar is a great film maker and I can’t wait to see more of what he has to offer us.

BTW, I also love this movie’s poster because it is an optical illusion; it came be seen as a goblet or as two men looking at each other and is a perfect depiction of the dichotomy of the movie’s plot about a father-son relationship and the quest to understand ancient texts.