Check out the next review for our Argumentative August blogathon. This time we have the lovely Abbi with a review of Philadelphia (1993). Tnx Abs!

Rob and I would like to once again welcome you to another review for our Argumentative August Blogathon. This next film, Philadelphia is being reviewed by Abbi of abbiosbiston.com. Let’s see what she thought of this movie… 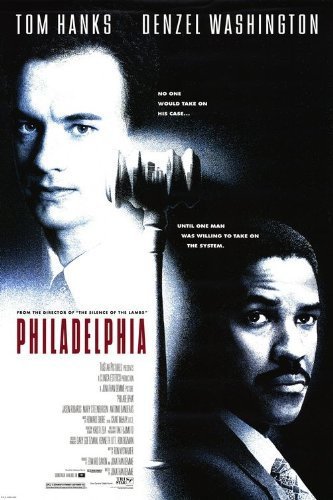 Tom Hanks plays Andrew Beckett an up and coming young lawyer in a large and successful firm. Pegged for great things Andrew is given a vital case by his employers but on the deadline day an important file goes missing and Andrew is fired for negligence. Andrew is convinced that he has been sabotaged because one of the partners has noticed a lesion on his forehead which is a symptom of the fact that he is suffering from AIDS and that he was actually dismissed not only because of this but because he is gay.