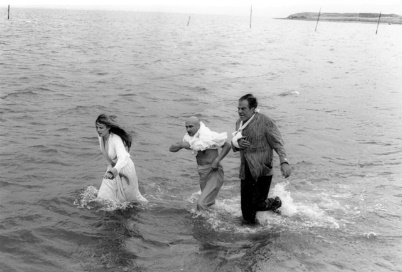 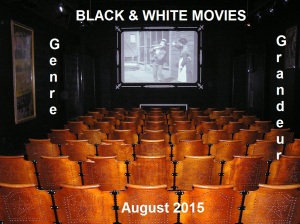 For this month’s next review for Genre Grandeur – Black & White Movies, here’s a review of Cul-de-Sac (1966) by Sherise of The Girl That Loved to Review

Let’s see what Sherise thought of this movie: 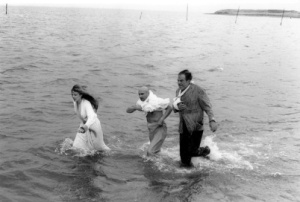 This is a relatively unknown film, which is a shame as it is one of the best dark comedies I have ever seen. Cul-de-Sac is Roman Polanski’s second English language film. It was made just two years before he would break into Hollywood with Rosemary’s Baby. Cul-de-Sac is about two gangsters on the run after a failed robbery. They take refuge on a secluded island with an Englishman and his French wife.

Cul-de-Sac is quite similar to Polanski’s first feature film, Knife in the Water. Both movies are shot in black and white and there are three characters trapped together in a confined space. The drama of the films comes from the shifting power dynamics between the three characters. Knife in the Water is a dark, serious, atmospheric film. As is conveyed in its title there is an air of danger. Cul-de-Sac is very different because while it is also dark it is probably the closest Polanski has come to doing a strict comedy.

Cul-de-Sac is witty and very quirky. It is a rare film in that it is totally the director’s vision. Some films you can feel the influence of a movie studio or a producer exerting control. But Cul-de-Sac is all Polanski. It’s probably not a movie that everyone would enjoy, but I think that most people would be surprised by how fun it really is.