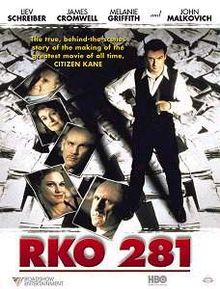 “Everything I am, everything I could be is in that picture!” – Orson Welles

Brief Synopsis – A behind the scenes look at how the movie Citizen Kane (1941) came to be.

My Take on it – This was such a fascinating movie to watch and it was even more interesting due to the fact that I had just watched Citizen Kane (1941) and had done a bit of research on it in between watching them both.

The story is told very well and in a very succinct fashion.

It is only 80 minutes long but manages to give us so much information of the behind the scenes work that helped produce a near masterpiece.

Liev Schreiber and John Malkovich work so well together that you can believe that they were Kane and Mankiewicz.

I think the best piece of casting tho was of James Cromwell as William Randolph Hearst. He is truly amazing in that role showing his hard edges but also his soft ones when needed.

This movie definitely deserved the Golden Globe it won for Best TV movie, unfortunately, it lost the Emmy to Tuesday’s With Morrie (1999).

I will always wonder how this would have been received as a theatrical release instead of by HBO (see trivia below).

Bottom Line – Excellent story that was such a pleasure to watch as a companion piece to Citizen Kane (1941). Schreiber and Malkovich work excellent together. Cromwell is amazing as Hearst. Definitely deserved the Golden Globe for Best TV movie. Highly recommended!

MovieRob’s Favorite Trivia – This was originally planned as a theatrical film. The original cast consisted of Edward Norton as Orson Welles, Marlon Brando as William Randolph Hearst, Madonna as Marion Davies, Dustin Hoffman as Herman J. Mankiewicz, Meryl Streep as Louella Parsons. Ridley Scott was slated to direct. But studios passed on the film because of the projected $40 million budget. Scott dropped out as director. Brando and Hoffman also dropped out. Gene Hackman was considered to replace Brando and Al Pacino was considered to replace Hoffman. Eventually, the project was scaled down to a television movie and the entire cast was replaced. (From IMDB)