For this month’s next review for Genre Grandeur – Black & White Movies, here’s a review of 12 Angry Men (1957) by Kim of Tranquil Dreams 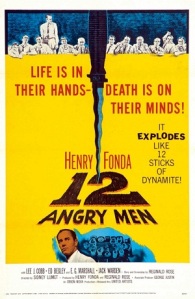 Twelve jurors are put together to decide unanimously on the verdict for a young boy’s future after he has been accused of murdering his father.   After one juror goes against the rest to stop a guilty verdict, they analyze the details of the murder step by step together although for some, reluctantly.  They soon realize personal prejudices and stereotypes may be the hardest part to overcome.

12 Angry Men is an amazing film set with one location, 12 actors and a hypothetical situation re-enacted.  Its easily one of the best crime dramas that lives through the test of time.  The black and white even adds a little extra charm and style to it as the years go by.  With a stellar cast and a great balance in point of views, while looking at relatively simple murder story, these men each bring a little something to add to the whole premise.

In a simple story here, what brings 12 Angry Men is the men themselves.  Each of them with their own personality emphasizing the point that we are all influenced by the our upbringing, beliefs, experiences and in turn our prejudices and stereotypes.  Different age, job status, environment, ethnicity: its all a part of what makes us the person we are.  These men are represent a different part of the spectrum and they each play a part in being more strongly for the guilty or the not guilty one while some are more neutral and sway a little.

What makes 12 Angry Men even more worthy as a Black and White film? Well, there is no doubt that no matter in what time period, a person will still have these influences.  It will be there subconsciously to whatever degree.  Some will try to break out of the mold and some will fall into another one, but it defines who we are.  12 Angry Men may have a brilliant story about solving the possibility of whether the young boy is a murderer or not, what is even more spectacular is watching each of the characters show their true selves.  This is a black and white film that transcends time because it will always apply to the people watching it.  That’s what makes it so great for this genre grandeur.