For this month’s next review for Genre Grandeur – Black & White Movies, here’s a review of All About Eve (1950) by Steven of Past Present Future TV and Film

This month we had 12 reviews for GG:

In addition, I watched and reviewed 5 additional movies from this genre for my Genre Guesstimation series.  3 of them will be now included in my own favorites of the genre. 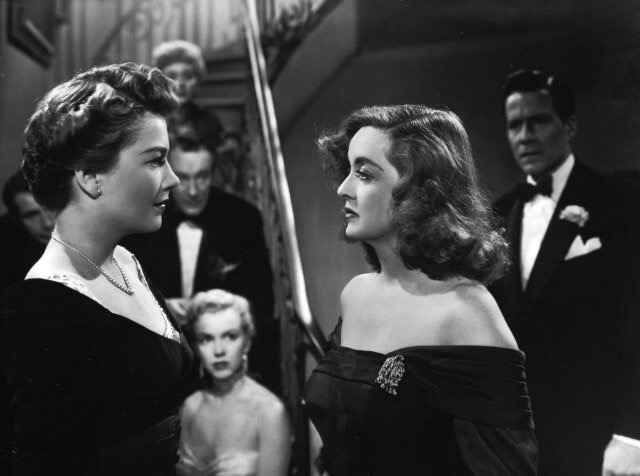 Some classic films, like many coming out today, can grow tiresome to see again and again. The novelty that made it so impressive to you the first time is not something quickly forgotten. And so, It’s hard to go back, even a second time, and watch a classic film you know you truly loved the first time around.

The 20th Century Fox film “All About Eve”, is a clever and juicy (before things were juicy) drama about fame and those who seek it.

The film was written and directed by Joseph L. Mankiewicz (“Guys and Dolls”, “A Letter to Three Wives”).

The film originally opened on Oct. 13, 1950. The film would go on to be nominated for 14 Academy Awards; winning six, six Golden Globe Awards; winning one, and three nominations at the Cannes Film Festival, winning two.

The problem with some theme choices for a blogathon is that you can’t then do all the film’s you want. You have to pick and choose. That’s a difficult job if you’re like me and have too many choices. Which one’s are the best ones to leave out and which one’s should you do? It’s one of the reasons I hate having choices. Because of this I usually stick with one or two things, like if I’m at a coffee shop and in need of a major caffeine fix, I like having two choices at most. Otherwise, and I tell people this in line as well as the barista, I’ll be there forever. Five minutes later, which is pretty much forever, I’m still there trying to decide what caffeine laced beverage I want. Hot or cold? Blended or iced? It goes on and on, and only gets worse. Choices. I hate them. Fortunately I was browsing on Netflix and stumbled upon this gem of a movie! I knew this would be one of my choices.

Like most movies, the characters are important. However, here they’re even more important as they really drive the story along. I believe, if it wasn’t clear yet, this is a character driven film. The need to like them or not, as it turns out, is absolutely crucial. This is achieved by the strong acting from every single person. I seldom get to write that.

Each performance was solid and had me liking them once the film got right into the main portion of the story. Somehow, even when they weren’t at their best, like Holm being part of a plan to stall Davis, I found myself still on her side. Even Ritter, who played Davis’ maid Birdie, is able to be likable, despite the fact that when you first meet her, she’s somewhat brash and immedietly distrustful of Baxter. I guess it helps that she’s got a sharp tongue and dark sense of humor, like Davis.

While all the supporting players are interesting in their own ways, it’s really, of course, all about Davis and Baxter, whom if you hadn’t figured out by now, plays the titular Eve. Davis is an “older woman” on Broadway and mainly juggles this new reality. She’s been playing roles that are more for younger women, but somehow still manages to draw a crowd each night. She’s well liked and successful. Once Baxter shows up and really starts to show her true colors, you begin to see Davis thinking about all of this. The trouble, even when she’s having a kind of well known meltdown or fit, is there’s no real dislike of her character. She manages to become vulnerable, even when trading sharply worded barbs with her friends. Because of Davis, there’s never a dull moment, nor a moment that isn’t more fascinating than the last.

Baxter, like in this film, came out of nowhere and really stole the show. Of course, as the title itself says, this story would tell you all about Eve. From the moment the first scene begins, and the camera lingers on everyone in the room, especially the actors that make up the principal cast of characters, you know the story will be good. Who is this Eve person? She’s a fan. She’s a young, doe eyed, impressionable girl that just wants to meet an actress she admires. She’s apparently a conniving and manipulative person. At some point this becomes her aim, after being treated so nicely by everyone. It’s this slow progression, which is a somewhat slow realization for some of the other characters, that Baxter only wants fame and she’ll do anything to achieve this. She also wants what she can’t have, like Holm’s husband and critics at a performance she wasn’t originally set to be in. Sometimes, at the beginning, you feel a bit bad for Baxter, but that’s only because Davis is seemingly attacking her. Soon you realize it’s all wasted emotion. She’s far more despicable than previously imagine. While this is a major character trait that has you disliking her mostly, I discovered something else. I found her even more captivating. Scary too, but utterly fascinating. I didn’t find this to be in the realm of love to hate, but more I just loved watching her be a bitch.

While the script was responsible for all of these characters and moments, not to mention dialogue, I can’t come up with a way to talk about it. I guess the best and quickest way is to just say what it was. It was smart, clever, and developed the characters in a pretty organic way. There never seemed a moment that was just designed to exist so the plot could move forward. The dialogue especially stood out. Depending on the character and the mood they were in, it could be more than just funny. It could be witty, or dark in tone as well as just plain clever. These characters have a way with words.

Along with the acting and overall story, the black and white look, for a film over 60 years old, was amazing. Of course restorations should account for some of this. I’m not sure how much, but even with that in mind, I’d like to believe that this film looked as gorgeous as it does now, even back in the 1950s. And I’m not just mentioning this as it’s the them for this month. No, I’m mentioning this because it’s one time where the black and white still holds. I’ve seen a few that don’t look that great. It happens and it’s unfortunate.

I’d say the worst part about the film isn’t that it’s up there in age, but that it seems, at times, to go on too long. While this character building and, daily life we see Davis going through with her friends, is fascinating and enjoyable, but at times it can seem tiresome. Some of the individual scenes start off great and they have a purpose, but some too seem longer than need be. It’s not so much that scenes needed to be cut, but that they could’ve been shorter and still maintained the growth we got in character and story.

Then, there’s the ending of the film. It mirrors that of the opening. The main difference, is that Baxter is a lot ruder than Davis was to her at the start. It startled me that there was a girl (Phoebe, played by Bates) waiting like a creeper in Baxter’s room, but as the scene progressed, it made sense. Also it was spelled out plainly for you. Bates wanted to meet Baxter, and as it turns out, be just as successful as she is now. In the end we see Phoebe trying on Baxter’s expensive coat and holding her Sarah Siddons Award, like Baxter did with Davis’ costume at the beginning of the film. I guess it just goes to show that everything happens in cyclical way, or something like that.

And, of course, as this is a classic film in many people’s eyes, this piece wouldn’t be complete without mentioning what we’ve gotten because of this film. Yes cinephiles have a great film, which is fun to watch again and again, and should be seen by everyone at least once, but a film that’s got an impressive legacy even to this day. It’s called pop culture for a reason. Yet, to me, it’s how this film is referenced within the confines of pop culture that matters. It’s not enough to just name drop it in a show or movie, or maybe real life, but to actually weave it into conversation in a way that shows you understood the film and know how to make a clever reference. With this film especially, it’s a sign that’s is legacy is solidly in tact. Without it, we wouldn’t have such gems as:

There are many others, but these are the one’s I’ve seen that are pretty well done. And, of course, they sound much better in context. If it weren’t for this film, like so many, there would no doubt be a lot less jokes being made, or films and television programs inspired by it. All this time later and we’re still better off because of this type of film. Maybe one day Hollywood can get back to actually putting out good films like this. Ones that entertain, challenge, and are smart all around would be a nice change. Too bad it’s mostly wishful thinking.