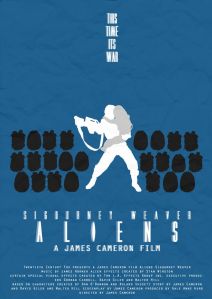 “Hey, maybe you haven’t been keeping up on current events, but we just got our asses kicked, pal!” – Hudson

Brief Synopsis – 57 years after the events of the first movie, Ripley is sent back to the alien planet with a squad of soldiers when communication is gone between Earth and the colonists

My Take on it – I have little doubt that if James Cameron had not made this movie, the franchise would never have taken off.

Being the adept director that he is, he was able to take the sci-fi horror genre to a whole new and exciting level.

The characters were superbly created and there are just so many memorable scenes and lines of dialogue from this movie that even close to 30 years later are familiar to most movie fans.

This in itself was a groundbreaking movie that helped pave the way for many more action-horror sci-fi movies because it proved that it can be done and be done properly.

Sigourney Weaver is amazingly fierce in this movie and proved that it IS possible to make an action movie with a strong female lead.

It’s mind boggling to think wherefFilm-making would be today without Cameron’s vision for this film.

There is no question in my mind as to which is the best of the 7 movies in this series and even with Ridley Scott planning 3 more film (at least) in this series, it will be hard to top what they achieved here.

Bottom Line – By far the best of the series, because Cameron knows how to make a great movie.  Loved the way this was made and there are so many memorable characters and quotes from this movie.  I think it actually helped motivate other film makers into realizing the potential of this genre.  Weaver became a household name as a strong female action lead with this film. Highly Recommended!

MovieRob’s Favorite Trivia – Sigourney Weaver’s Best Actress Academy Award nomination for this movie was the first ever for an actress in a role in an action movie.   (From IMDB)