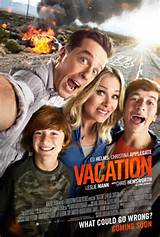 Brief Synopsis – Rusty Griswald decided to reconnect with his family and takes them on a vacation retracing the steps his family took to get to Wally World all those years ago.

My Take on it – Hollywood has been inundated over the last 30 or so years with numerous sequels, reboots or remakes to movies that have been hits and in many cases, a retool of a movie isn’t justified at all.

This movie has the ability to claim that it is all 3 but still works quite well. (see trivia below).

I was laughing so hard throughout almost the entire movie because they did such a wonderful job of putting this together.

The co-Directors/Writers Jonathan Goldstein and John Francis Daley must have worked really hard on this one and it definitely shows.

Daley actually had his popular character on the TV series Bones killed off at the beginning of last season in order for him to have the time to work on this project.  To me that shows a lot of foresight, dedication and guts to make such a move.  ( I was always a big fan of Sweets 🙂 and was personally sorry to see him go.)

They were able to properly gauge the balance between slapstick and raunchy humor to keep us laughing the whole way thru (which I was).

Ed Helms and Christina Applegate have such amazing chemistry on-screen that I actually felt that they did a better job working off each other than Chevy Chase and Beverly D’Angelo were able to accomplish in the original 32 years ago.

This is one I’m gonna wanna see again in the near future because this is the right way to make a sequel/remake/reboot and I am curious to see what Goldstein and Daley give us on their next joint project.

Bottom Line – Hilariously done.  Doesn’t quite feel like a remake or a reboot but actually a sequel to the original.  The co-writers/directors did an amazing job putting this one together because they got the right balance between raunch and slapstick humor to keep most comedy fans amused.  Helms and Applegate have great chemistry together and in some ways they work better together than Chase and D’Angelo did 32 years ago. Recommended!

MovieRob’s Favorite Trivia – The movie has the curious distinction of simultaneously being a sequel (the prior films are acknowledged and referenced), a remake (the plot and some scenes are the same as or very similar to those of the earlier film) and a reboot (new film in a dormant series with a new cast). (From IMDB)