For this month’s next review for Genre Grandeur – Movies of the 70’s, here’s a review of Grey Gardens (1975) by Anna of Film Grimoire.

Thanks again to Sherise of The Girl That Loved to Review. for choosing this month’s genre.

Next month’s Genre has been chosen by me.  In honor of the month when Marty McFly came to visit us here in 2015, I have decided that we will be reviewing our favorite movies featuring time travel.

Let’s see what Anna thought of this movie: 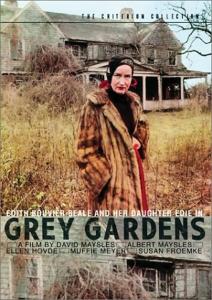 An iconic documentary about the isolation and degradation of women from another age, Grey Gardens (1975) is a piece of ‘fly on the wall’ cinema that is simultaneously engaging and disturbing. Grey Gardens was directed by Albert and David Maysles, and Ellen Hovde and Muffie Meyer, and it tells the story of Edith “Big Edie” Ewing Bouvier Beale and her daughter, Edith “Little Edie” Bouvier Beale; notably related to former US First Lady Jackie Kennedy Onassis, and also notably residing in a dilapidated and vermin-ridden old house in the wealthy town of East Hampton. The masterful eyes of David and Albert Maysles guide us as we simply watch Big Edie and Little Edie in their environment; having arguments, musing on life and ethical values, and reminiscing on what their lives could have been if they made different choices.

I chose this film for Rob’s ‘Favourite Movies from the 70s’ Genre Grandeur because it is one of my favourite documentaries of all time. It’s a different type of documentary as a result of the Maysles brothers’ ‘direct cinema’ technique, where the documentarian is not a participant in the story or subjects’ actions – the camera simply watches as the subjects unfold their own story and direct the action themselves. This is exactly what the Maysles brothers allow Big Edie and Little Edie to do – just to be themselves, to go about their normal day, however with a camera observing them. And the results are strangely fantastic. You wouldn’t think that a documentary about older women fighting with one another about old grievances would be engaging, but it is. These are truly complex women with some long-standing issues, and the degradation of their surroundings appears to mirror the development of their relationship as mother and daughter.

Big Edie and Little Edie are certainly very interesting characters indeed. Big Edie, the aunt of Jackie Kennedy Onassis, is an older woman who spends the majority of her time on screen reclined on a bed which is cluttered with detritus, and at one point actually cooks boiled corn whilst lying in her bed. Little Edie is a lot more active, and spends the majority of her time swanning about in a swimming costume with her iconic headdresses covering her greyed hair, a youthful illusion as she is in her late 50s. Little Edie increasingly appears frustrated that she was ‘forced’ to come to Grey Gardens to care for her mother 25 years ago, when she could have been married to a number of gentleman befitting her status in society. It becomes clear over time that this complicated mother and daughter are not quite right, as their rantings can become disjointed and tangential.

Perhaps as a result of the Maysles brothers’ direct cinema technique, we are treated to some pretty uncomfortable moments, and some really intense arguments between the mother and daughter. However, the direction throughout is flawless – not just in watching the women, but also in panning across to the other houses in the high society seaside neighbourhood of the Hamptons, and comparing the decay of Grey Gardens to its idyllic surrounds. There are some truly beautiful cinematographic moments focusing on the ‘sea’ of green ivy and trees that swallow up the house, and of the literal sea that is right next to the house.

I love this documentary. It was made during a time where the Maysles brothers were churning out a lot of great documentary cinema – including Salesman (1968) and the Rolling Stones documentary Gimme Shelter (1970). But the stars of Grey Gardens are Big Edie and Little Edie, two women trapped in the past, sorting out their dramas and unresolved conflicts on screen for us to observe and get tangled up in. This film has been described as an experience that you can ‘feel in your gut’, and I would tend to agree with that. Grey Gardens is a complex film experience that must be seen by all lovers of documentary cinema.