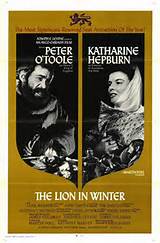 Despite watching this in time for the 13th, I had a backlog of posts to write so I only got to it now.

“In a world where carpenters get resurrected, everything is possible. ” – Eleanor

Brief Synopsis – Before he dies, Henry II, King of England must decide which of his three sons will inherit his throne which leads to much manipulation and plots to try and get the throne.

My Take on it – One of my favorite things about adaptations of plays to the screen is that quite often plays have very witty dialogue that must be used to elevate the story on the stage.

On screen, they have the added visuals to help make us believe that we have been transported to a different time and place and if we get some amazing dialogue added to the mix, things can get quite fun.

This movie has such amazing dialogue and it is expertly delivered by the amazing cast of actors who all have a string Shakespearean background.

The dialogue delivered is sharp and knows how to hit its target.  It is also interesting to hear Hepburn deliver innuendo dialogue like the best of them.  She went on to win (tie) for Best Actress that year at the Oscars.

Now that I’ve finally seen this movie, I am quite baffled how it lost Best Picture to Oliver! (1968) because this movie is clearly better IMHO.

Bottom Line – Great dialogue makes this so much fun to watch.  Excellent cast of actors that included ones that were destined for greatness besides those who had already proved it previously. Baffles me that this didn’t beat Oliver! (1968) for Best Picture that year.  Hepburn really deserved her Oscar (even if it was a tie). Highly Recommended!

MovieRob’s Favorite Trivia – Although Katharine Hepburn and Peter O’Toole had met years earlier and she was a great admirer of his work, she had no intention of putting up with the rather bad behaviour he often exhibited on his productions. “You’re known to be late,” she told him on the first day of work. “I intend for you to be on time. I hear you stay out at night. You’d better be rested in the morning if you’re going to work with me!” (From IMDB)