I’d be hard pressed to find a film that hasn’t influenced my love for cinema more than Back to the Future and fortunately it hasn’t been sitting idly by collecting dust in the National Film Registry alongside Days of Heaven and Dances With Wolves. Back to the Future is of a wholly different breed.

Okay, sure, that last one is hardly revolutionary in the grand scheme of things but it did launch the career of Keanu Reeves after a somewhat flimsy start. In fact, of that list Back to the Future and Bill and Ted are the only two to explore time travel extensively, oh and Terminator. Of course, these weren’t the only two to explore such a theme, and it had been explored before the 80s, but it was during this period that the sub-genre of time travel really took a hold of the public imagination.

Today officially marks the 30th Anniversary since the theatrical release of Back to the Future (4th December UK) and it still manages to capture an essence of wonder and innocent imagination that is often missing in contemporary cinema. Unlike the Hill Valley clock tower, Back to the Future doesn’t need saving. Oh no, there will be no naggy lady shaking a charity box in front of your face as you’re about to make out with your high school sweetheart that’s for sure. Its legacy is indisputable and despite the likes of Mad Max: Fury Road, Terminator Genisys and Star Wars: The Force Awakens brushing off the cobwebs of their respective franchises this year, Back to the Future remains an immovable and timeless piece of cinema that spans generations.

Back to the Future‘s depth of genres and sub-genres include Sci-Fi, Comedy, Adventure, and Fantasy, as well as Coming of Age, 80s Teen, and even Musical. Drawing on such a wide range of influences and throwing them all into such an awe inspiring story makes for a wholly immersive experience that isn’t dressed up or pretentious.

Alan Silvestri had the task of creating an old-fashioned movie score that swells and incorporates the buzz of Hill Valley. It had to be adventurous , it had to be big, and it had to be enthusiastic. The result is iconic. Silvestri’s iconic score adds an incredible depth to the ‘Time’ theme throughout. The score is both reminiscent of classic movie scores, and incredibly unique. Hill Valley is beautifully authentic and the score only adds to that authenticity.

Written by Bob Gale and Robert Zemeckis Back to the Future relies on a certain level of exposition but it never feels intrusive. The inimitable plot moves from scene to scene with real purpose. The teasing clues dropped early on in the McFly family home, at school, and most importantly between Marty and Doc, come to life when Marty accidentally travels back in time to 1955. 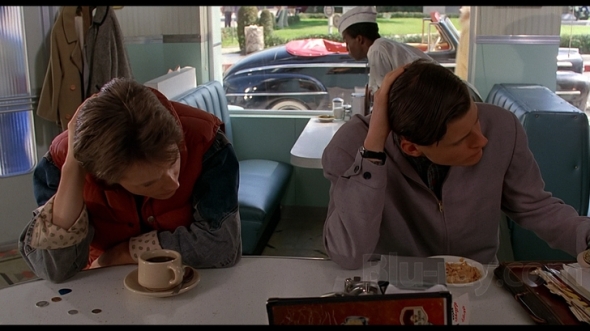 The endlessly quotable quality and comic timing succeeds because of the performances from Christopher Lloyd and Michael J. Fox first and foremost, but the entire supporting cast put in magnificent turns. Such iconic performances, storytelling and direction inspired both Back to the Future II and Back to the Future III which both explore different timelines. Crafting such a unique style around an intricate theme Back to the Future and its sequels benefit from a truly original story that consistently drop hints and clues about the progression of the plot whilst simultaneously explaining earlier plot points and scenes.

The legacy of Back to the Future continues to grow. Now celebrating its 30th anniversary special edition re-releases on both DVD and Blu-Ray have been featured recently, the much anticipated novelty ‘Back to the Future Monopoly’ and just last year Back to the Future was the subject of the hugely successful ‘Secret Cinema’. But its legacy doesn’t just inspire novelty items and nostalgic fan engagement. The indelible relationship between cool kid Marty and the garrulous Doc was completely unique at the time. But contemporary shows such as the Rickdonculous Rick and Morty draw on  Back to the Future and expand upon one of *the* defining science fiction relationships and adapt it into something special in homage to this science fiction classic.

The innocent charm, nostalgic beauty and sheer originality of Back to the Future endures because of its alluring rewatchability and intricate plot that amuses and captivates its audience from ‘Power of Love’ to ‘Johnny B. Goode’.