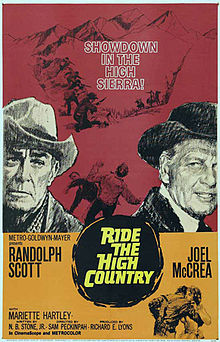 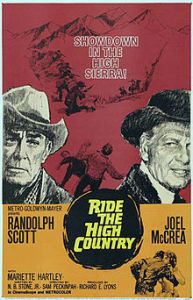 “Pardner, do you know what’s on the back of a poor man when he dies? The clothes of pride. And they’re not a bit warmer to him than when he was alive. “- Gil

Brief Synopsis – An ageing former lawman convinces and old friend and his protege to help him transport and safeguard a gold shipment. Little does he know that they plan to rob him.

My Take on it – I came across this Western by accident and am so grateful that it happened.

The story itself seems to be a straightforward Western but the script and plot are layered in such a way that we feel so much for the characters.

This movie touches on themes of integrity, friendship, duty, chivalry, ideals of a former lawman, aging of a gunfighter and of course how one acts in the proper way when faced with an immoral society.

This was directed by Sam Peckinpaw in such a way that it transcends being a mere Western and becomes something so much more.

Stars Randolph Scott and Joel McCrea are both superb and help us to relate the themes depicted so well.

Bottom Line – Great western by Peckinpaw that covers so many important themes that help it transcend its status as a mere Western. Scott and McCrea are both excellent. Layered story and script that is shot so well. Highly recommended!

MovieRob’s Favorite Trivia – Final film of Randolph Scott. He retired from acting once he saw the finished film, saying he wanted to quit while he was ahead and that he would never be able to better his work here.  (From IMDB)