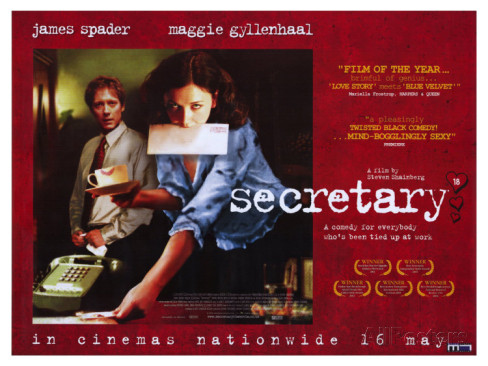 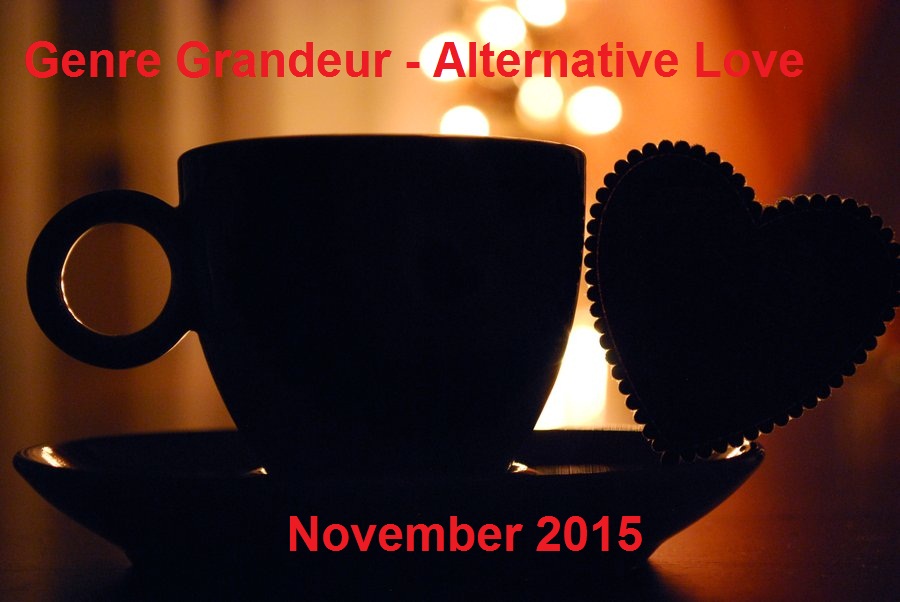 For this month’s first review for Genre Grandeur – Alternate Love Story Movies, here’s a review of Secretary (2002) by Reut of Sweet Archive 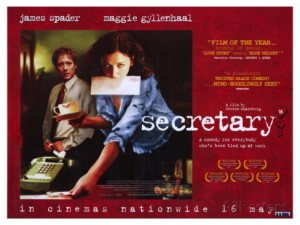 It’s real easy to enjoy a film like Secretary. It has just the right amount of everything; sass, sadness, naiveté, honesty, fun and love.

Maggie Gyllenhaal is Lee Holloway, a quirky and sweet young woman so tangled up in her own pain, she finds the perfect escapism when cutting herself. She even has a decorated tool kit for it. Released from a mental hospital and dreaming of becoming someone, Lee finds a job as a secretary for a local paralegal lawyer. Her new boss is Mr. E. Edward Grey (a name she often loves to repeat), played by James Spader, who is a dominant man with an obsession of his own. A strange employer-employee relationship is threaded between the two involving sexual fantasies and sadomasochism.

I don’t think there’s a better casting choice for this film than Gyllenhaal and Spader. Both are absolutely fantastic. I think I mentioned this before, but I LOVE LOVE LOVE Maggie Gyllenhaal! She’s a perfect Lee Holloway! Spader’s Edward is very much commendable. He’s a harsh man with a fetish for typos and loves punishing Lee whenever she’s making one. Obedient Lee soon bends over for a little butt slapping. And they both get a kick out of it and complete each other’s need for satisfaction and self-love. They depend on it. The relationship is never harmful or hurting, but rather playful, fun and very much satisfactory.

Lee is has this awkward and sensitive demeanor. She has the naiveté and sensitivity of a little girl. With her boss’s assistance, Lee rediscovers herself and gradually transforms into this suddenly grown woman, and slowly developing a taste for a certain type of fantasies and sexual tendencies. Edward is more of a tough nut to crack. He has a thin line between being a perfection seeking boss, releasing occasional weaknesses.  Lee becomes the dream secretary for him the moment she offers to go through the garbage to look for a lost file. When he unintentionally notices her cutting ritual and gently confronts her about it, he plans his own little rituals as a replacement to overcome the pain.

The location selection and music really help reinforce the film’s strange vibe.
Edward’s office is much like the man himself, dark and old-fashioned. The location is not at all trendy looking, and is rather equipped with darker color shades and old furniture, resembling an old hotel lobby. The “Secretary Wanted” sign outside looks just like the “Vacancy” motel sign, which slightly indicates a somewhat unusual style for an office.

The film is followed by great tracks and musical sequences composed by my favorite, Angelo Badalamenti. The original OST also includes the famous Combustible Edison Track Vertigogo, which is also the opening track of Four Rooms.

Secretary is truly a romantic one. No secrets, no boundaries, true acceptance to abnormal behaviors, having their little fun world of games and rituals. Love it!