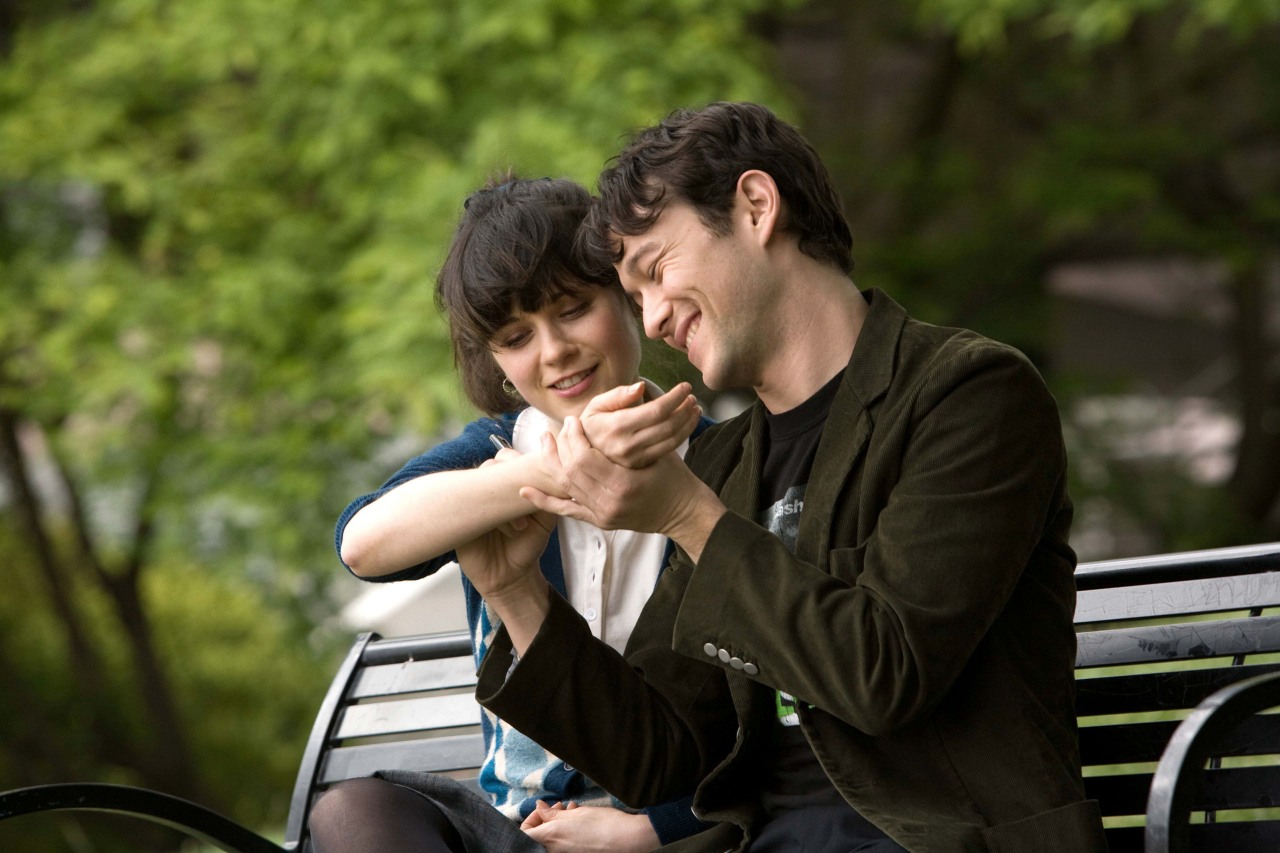 For this month’s next review for Genre Grandeur – Alternate Love Story Movies, here’s a review of (500) Days of Summer (2009) by S.G. Liput of Rhyme and Reason

That makes all love predictable;

Their dates are fun; their hearts are full

Until reality sets in.

The happy times of blithe romance,

Of jokes and dates and song and dance

Give way to torpor and chagrin.

When boy-meets-girl does not pan out

And casts the faithful into doubt,

Perhaps the truth for the devout

Is true love has yet to begin.

The whole idea of alternative romances is intriguing, though it’s rather hard to define. Still, I know this film qualifies since Abbi herself named it among her top ten of the genre. I’ve heard so many positive reviews of (500) Days of Summer that I was hoping it wouldn’t disappoint, and while it had its stumbles, it’s a film I both enjoy and admire.

The enjoyment comes from how the “romance” plays out. If presented in a more straightforward way, the story would seem much more ordinary and unengaging, but its nonlinear recount allows it to emphasize the little moments of a relationship, such as how jokes once so funny lose their amusement over time. The collage of recollections jumps back and forth between the initial winsome half-dates to the bliss of happy dating to the crushing despair of a breakup. The editing is a major strength since random events that may have left viewers confused instead weave together naturally into a tapestry of memory.

Joseph Gordon-Levitt is at his most likable as Tom, the would-be wooer of Summer Finn (equally well-cast Zooey Deschanel), but the film states up front that this is a boy-meets-girl story, “not a love story.” Therein lies the admiration and the reason that (500) Days of Summer falls into the category of alternative romances. In the movies, nice and earnest young men always end up with the quirky beauty, right? It’s not always so in real life. Summer has no desire for any kind of serious relationship, and though Tom is reeled in effortlessly, he is flabbergasted by her apparent desire to have it both ways, to have a boyfriend but never commit to it. While we, like Tom, retain hope that movie breakups are meant to be temporary, there is a moment when it finally hits us (like Tom) that Summer is not an admirable person. Yet as demoralizing as such a realization is, the film does not devolve into cynicism. It toys with the possibility but manages to still affirm that romantic dream that no one wants to surrender.

As much as I liked (500) Days of Summer, I got the feeling that it was trying to be this generation’s When Harry Met Sally…, an ambition it doesn’t live up to. Like the Rob Reiner classic, it seeks to offer insights into modern relationships and features a few humorous character interviews to glean their opinions on love. There’s even a scene where the girl spouts something inappropriate in a public place, which is not really funny here without any context. I also found it interesting that Tom and Summer’s romance mirrored Sally and her pre-Harry lover Joe, particularly in her final complaint about him. Go rewatch it, and you’ll see what I mean. Perhaps I’m just mainstream, but in this case I do prefer the more conventional romance.

Even so, (500) Days of Summer is a prime example of an alternative romance. My VC doesn’t agree and disliked the film for its too-close-to-home honesty about relationships. To me, though, that honesty (which is never too bleak) makes it a uniquely perceptive watch and a good fit for the genre. After all, how many movie arguments lead the woman to apologize first? For a film made up of good and painful memories, it has its fair share of funny and memorable moments, such as the unexpected musical number midway through, as well as cleverly creative technique and a tremendous soundtrack. It may not be a love story, but it’s a story that many will love.