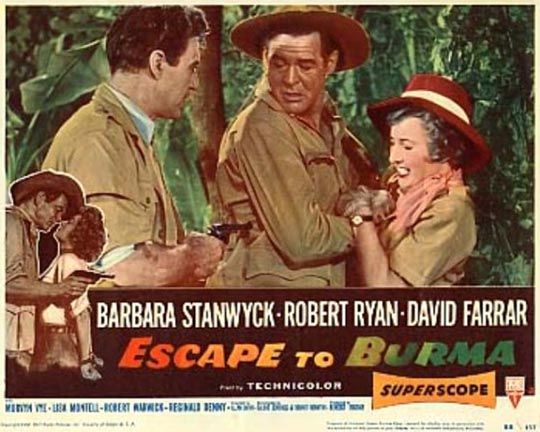 This is the third of 4 reviews that are part of the Barbara Stanwyck Blogathon being held yesterday and today over at In the Good Old Days of Hollywood.

Thanks to Crystal for letting me take part 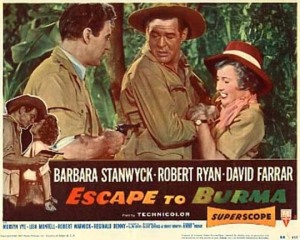 “[to Brecan and Cardigan] The more I see of you two, the more I like elephants. ” – Gwen Moore

Brief Synopsis – While being pursued by a British policeman, a fugitive seeks refuge at a teak plantation and quickly falls in love with the beautiful owner.

My Take on it – This is a movie that wasn’t easy to get through because it was done so poorly.

The story is silly and boring and most of it felt way too predictable.

On the plus side, we can be thankful that it’s relatively short (83 min) and we get to see lots of exotic animals to help distract us  from all the silliness.

The love at first sight between Robert Ryan and Barbara Stanwyck feels way too forced and fake and by the end, I didn’t care about what would happen to any of teh characters.

This is all quite unfortunate because I’m sure that a good story could be squeezed out of this plot if one tries hard enough.

Bottom Line – Extremely boring and predictable movie that probably could have been done much better. Ryan and Stanwyck love at first site feels too fake and in the end, we don’t care much for any of the characters.  Interesting array of exotic animals featured throughout help distract the viewer from the silly plot.

MovieRob’s Favorite Trivia – In the Burmese jungle temple, some of the apes are chimpanzees, which only live in Africa. (From IMDB)