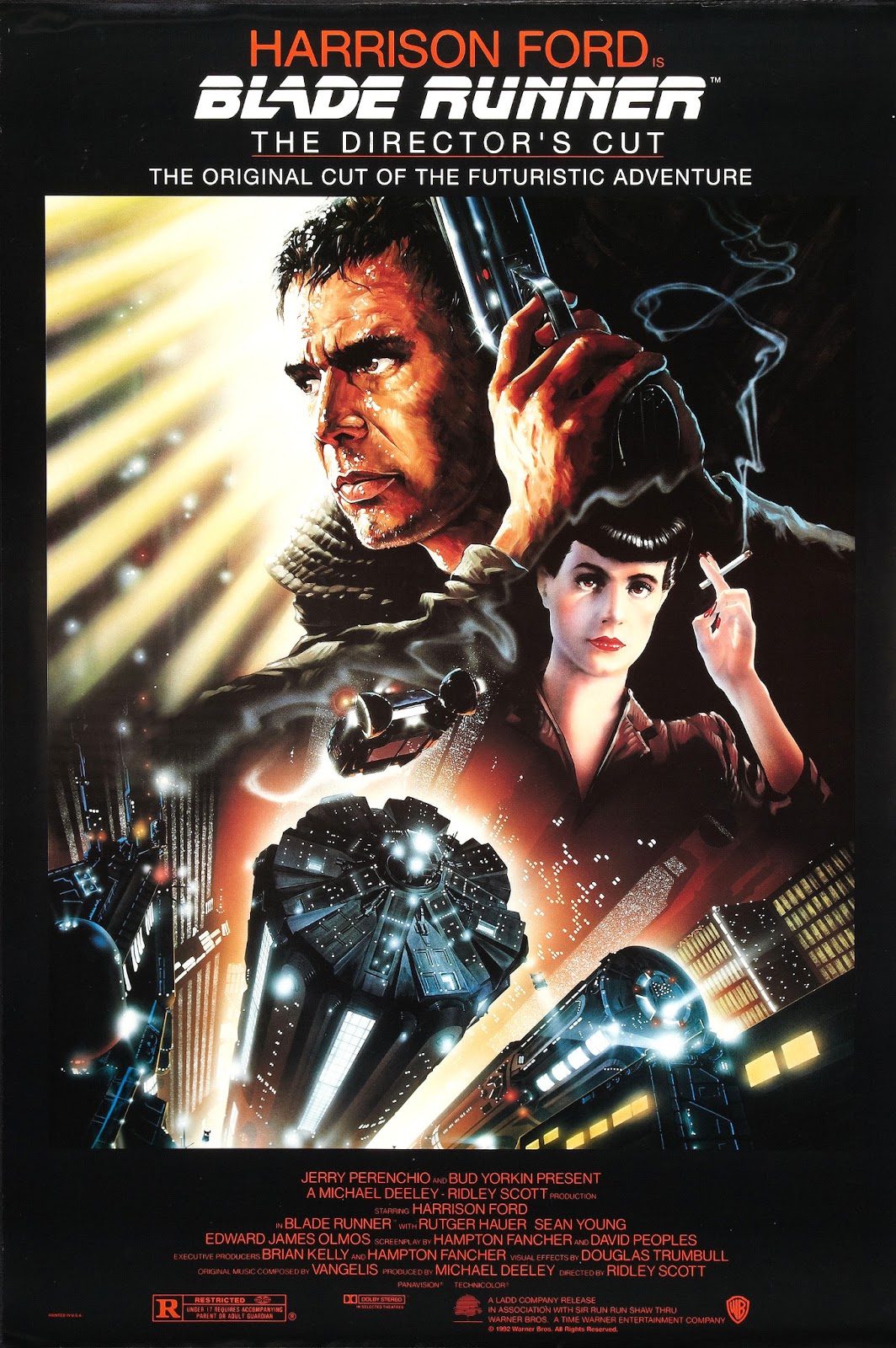 For this month’s next review for Genre Grandeur – Sci-Fi, here’s a review of Blade Runner (1982) by Niall of Raging Fluff

Let’s see what Niall thought of this movie: 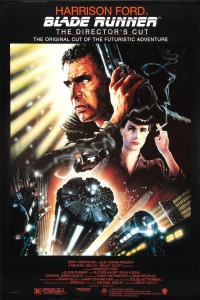 Synopsis: In a rainy, polluted Los Angeles in 2019, genetic engineers for the Tyrell Corporation have created replicants – superhuman androids that are used as slave labour in outer space, and who have a built-in lifespan of only four years. Renegade replicants are hunted and killed by police officers known as “Blade Runners”. When a group of replicants led by Roy Batty (Rutger Hauer) returns to Earth hoping for more life, it is up to a blade runner called Deckard (Harrison Ford) to stop them.

Ridley Scott’s Blade Runner is a film I can watch again and again, and with each viewing I discover something new. If you’ve never seen it, I envy you the pleasure of seeing it for the first time: depending on what sort of films you’ve seen, Blade Runner might be one of those films that alters your idea of what science-fiction can be. From its startling opening shots of an overgrown, hellish industrial cityscape reflected in a human eye to its final image – the sudden closing of an elevator door on the hero, now wondering about his own identity and the things he has seen and done – it is a painfully human view of an inhuman society. And if parts of it seem familiar to you, that’s because for years lesser talents have been ripping off its look.

Based on Philip K. Dick’s Do Androids Dream of Electric Sheep, it’s a richly textured blend of science-fiction and film noir that presents a brutal, dystopian vision of the future, a corporate city-state inhabited by the poor, unlucky masses who failed the physical that would have gotten them off Earth to one of the space colonies. A giant blimp floats above, beaming its lights down, a game-show announcer voice blaring that “a new life awaits you off-world, a chance to begin again in a golden land of opportunity,” but it’s doubtful anyone will have the chance. They’re like the inhabitants of Casablanca waiting for travel papers they’ll never get. Indeed, the urban hell reminds me oddly of Casablanca: an exotic but tired city filled with black markets, desperate, hustling people, dozens of languages and dangerous nightlife.

More human than human is the motto of the Tyrell Corporation, and that may be why human life here is so cheap. If anything, it’s feudal. Tyrell (Joe Turkel), the man who designed the replicants, lives in opulent splendour with his artificial owl at the top of a giant pyramid, while at street-level, peasants scramble and steal. Deckard (Harrison Ford) is somewhere in the middle. “If you’re not cop, you’re little people,” he’s reminded at one point. He could probably live in the idyllic off-world if he wanted, but like any noir detective, he’s more comfortable in the grime of the city. He looks up at the blimp with contempt. He’s dismissive of his obnoxious boss Bryant (M. Emmet Walsh) and the fussy, too-smooth Gaff (Edward James Olmos). Deckard knows his way around the seedier parts of town. He puts the squeeze on witnesses when he has to (“your license in order, pal?”). He even borrows a trick from Humphrey Bogart in The Big Sleep when he pretends to be a nerd.

For him to stay above the fray he’s required to kill replicants. In corporate-speak it’s called retirement. It’s just a job, it’s not personal. “Replicants are like any other machine: they’re either a benefit or a hazard. If they’re a benefit, it’s not my problem.” So why does he seem troubled by it? He meets the beautiful Rachael (Sean Young), and she’s a curious mixture: she looks like a 1940s career girl (and smokes like one), but behaves like a fragile virgin. After they meet, in the tradition of cynical, existential private eyes, Deckard sits alone in his depressing apartment, drinking and thinking. But I’m pretty sure Humphrey Bogart never thought of unicorns: I won’t tell you why I think Deckard dreams of a magical animal in a pastoral setting. There is still intense debate on the internet as to what it means.

For a detective film, it moves quite slowly. What energy it has it owes to Rutger Hauer in one of his best performances as replicant Roy Batty. With spiked bleached hair and leather trenchcoat, given to howling and quoting William Blake, Batty is one of cinema’s great, lurid villains. He’s partnered with Pris (Darryl Hannah), a waifish ragdoll. This is a film with vulnerable robots striving to be human and a child’s view of sexuality (watch how Hauer and Hannah kiss). In the end you’ll feel sorry for them.

Blade Runner has a look and style that was massively influential. The visual effects were done with models, front projection and matte painting, and are more effective than much of the CGI nonsense we see today. The attention to detail is impeccable; there’s something of interest wherever you look, and though much of it is ugly, it’s beautifully shot. Is it cyberpunk or steampunk? I think it’s both. There are flying cars and robots, but much of the machinery looks Victorian. The machine used to test replicants looks like equipment a nineteenth century scientist might have had: it has bellows and makes hissing noises.

Blade Runner had a famously difficult production, with weeks of night-shoots in the rain, truculent crew-members, and studio executives leaning heavily on director Ridley Scott. After poor test-screenings, the producers tacked on a clunky voice-over and an out-of-nowhere happy(ish) ending.. It didn’t help. Released in 1982, a few weeks after E.T., it bombed as a summer popcorn movie, and inexplicably its effects and design were overlooked at the Oscars. The critics weren’t kind. Missing its message, Roger Ebert thought the story lacked humanity and snarkily wrote “I suspect my blender and toaster oven would just love it.”

But it soon grew a cult audience that was in awe of its production design, visual effects, beautiful Vangelis score, bleak, Orwellian view, and the difficult, metaphysical questions about humanity it posed. This was not the shining city on the hill that Reagan had promised America would be, and as sci-fi entertainment it was worlds away from what Spielberg was offering. Several different cuts of the film exist. A restored “final cut” without voiceover was released in 2007: that is Ridley Scott’s favourite version, and that is the version you should try to see.