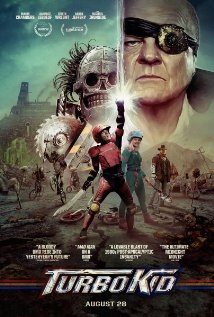 For this month’s first review for Genre Grandeur – Sci-Fi, here’s a review of Turbo Kid (2015) by Darren of MovieReviews 101 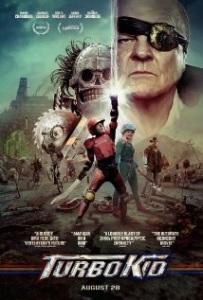 Plot: In a post-apocalyptic wasteland, a comic book fan dons the persona of his favourite hero to save his enthusiastic friend and fight a tyrannical overlord.

Story: Turbo Kid starts by taking us back to a post-apocalyptic world of 1997 where our hero the Kid (Chambers) goes about his day just to survive this harsh world all on his BMX. The kid keeps to himself while still knowing the traders who leave him be, but he finds he is about to make a new friend in Apple (Leboeuf).

As the twos friendship grows they find out about the ruthless leader of a group Zeus (Ironside) as the Kid looks to put an end to the war going on in the wastelands once and for all.

Turbo Kid is such a fun film that has a story that could rival any Mad Max film. We get the routine post-apocalyptic world but you would need to suspended your disbelief because the world could easily be questioned. Going past this we just have to love where this goes with it’s over the top battles. This is one of those stories that doesn’t have too much to worry about and you can just sit back and enjoy from start to finish.

Munro Chambers: The Kid travels around the wasteland alone following his simple rules. His world is turned upside when Apple comes into his life offering him a chance to have friendship but when they come up against the ruthless Zeus The Kid gets a chance to change the wasteland and gain revenge for his parents death. Munro is great in this role showing that he will be a force in film in years to come.

Laurence Leboeuf: Apple is the girl that comes into the Kid’s life she is always positive which helps the Kid come out of his shell. While it turns out she is a robot the two have a friendship neither have had before meeting each other. Laurence gives us a performance that is easily be one of my favourites in recent years.

Michael Ironside: Zeus is the ruthless leader of a gang that have designed a way to get water from the human body in its purest form. When the Kid gets involved in his plans destroying his machine, he sets everyone out to kill the two of them. Michael is good in this role showing he is always a good villain.

Edwin Wright: Skeletron is the henchman for Zeus with his metal skeleton mask and his blading slinging weapon that cuts through anything. He makes for a loyal killer to the deadly Zeus that enjoys taking his victims laughs. Edwin is good in this role with one of the most iconic characters in recent years.

Support Cast: Turbo Kid has a good supporting cast that all work to help the story flowing.

Director Review: Francois Simard, Anouk Whissell, Yoann-Karl Whissell – The trio give us one of the best action adventure films of recent years that feels fresh, wild and over the top.

Action: Turbo Kid has beautiful over the top action from start to finish.

Adventure: Turbo Kid shows the quest our Kid goes on to save the girl and escaping the villain.

Sci-Fi: Turbo Kid brings us into a sci-fi film that will show a post-apocalyptic world.

Settings: Turbo Kid uses the settings that really all work to create the atmosphere involved.
Special Effects: Turbo Kid has stunning effects to make the kills look realistic every time even if they are over the top.

Suggestion: Turbo Kid is a must watch for all the action horror fans out there who love over the top action. (Watch)

Best Part: Apple is such a great character to have in the world created.

Worst Part: The over top will be too much for some people.

Kill Of The Film: Death by Unicorn kill.

Favourite Quote: Apple ‘This is my gnome stick.’

Tagline: Coming Soon To a Wasteland Near You!