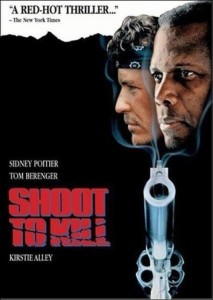 “Everybody else up here acts like they’ve never seen a black man before. Why should the bear be different? ” – Stantin

Brief Synopsis – An FBI agent trying to catch a clever killer must team up with a mountain guide when the killer joins a group of hikers destined to cross into Canada.

My Take on it – Certain movies are really only meant to be seen once .. or maybe twice, but when the gimmick is no longer a secret, there usually isn’t much else left to want to keep the viewer interested.

The whole gimmick is that we don’t know who the bad guy is until about half way through.

They cleverly cast numerous known actors who are notorious for playing bad guys as part of the group of potential suspects so that we are completely thrown off when we finally find out the identity.

The problem is that once you actually watch this while knowing who the bad guy is, there is little to know suspense  or mystery left to try and figure out.

The story is a very generic one about a “Fed” doing all he can to “get his man”.

The casting of Sidney Poitier, Tom Berenger and Kirstie Alley as the three leads trying to capture the bad guy (more or less) is ok, none of them have much to do because the script feels too generic the whole way through.

There are so many better movies out there…

Bottom Line – Was much better the first time because it’s better not to know who the murderer is because it adds to the suspense and mystery. Great cast of actors who previously played killers to keep the identity of the bad guy secret for as long as possible. Berenger, Poitier and Alley are all ok here but they unfortunately have little to work with since besides the secret identity aspect there isn’t much here that doesn’t feel generic.

MovieRob’s Favorite Trivia – Called “Deadly Pursuit” in the UK. Because of the recent massacre in Hungerford, where Micheal Ryan had gone on a shooting rampage killing around dozen people and injuring a number of others, it was thought to be in bad taste to release a film with “shoot” in the title. (From IMDB)