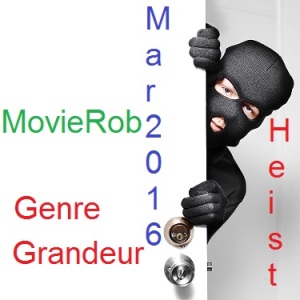 For this month’s next review for Genre Grandeur – Heist Films, here’s a review of Ocean’s Eleven (2001) & Ocean’s Thirteen (2007) by Ted S. a contributor at Flixchatter

Let’s see what Ted thought of these movies:

I lost count on how many times I’ve watched these two Ocean’s films; I’m going to pretend that Ocean’s 12 never existed; the self-indulgent film was an embarrassing to everyone who’s involved in making it. Don’t get me started on the whole Julia Roberts pretended to be Julia Roberts sequence. I wanted to punch the writers and director Steven Soderbergh for thinking that we the audience would be that stupid and thought it would be a fun scene to watch.

Well speaking of Soderbergh, in the early 2000s, he’s the director every actor wanted to work with. If I remember correctly, two of his films in 2000, Traffic and Erin Brockovich were box office hits and got nominated for best picture at the Oscars. He received the golden statue for directing Traffic. So of course there were big expectations for his next picture. Opened during the holiday season of 2001, Ocean’s Eleven was one of that year’s biggest hits and spawned two sequels. Of course the cast was probably the big draw, packed with three A-listers George Clooney, Brad Pitt and Julia Roberts; veterans Andy Garcia, Carl Reiner and Elliot Gould and young up and coming actors such as Matt Damon, Don Cheadle, Casey Affleck and Scott Caan. 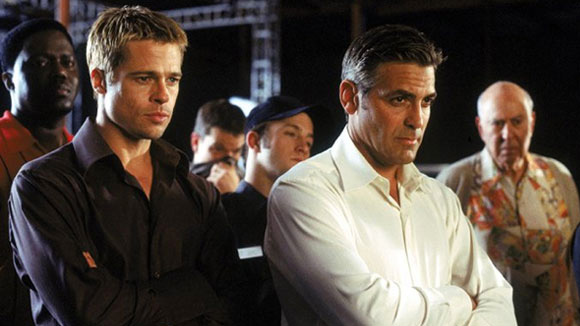 Recently paroled Danny Ocean (Clooney) decides to get in touch with some of his old buddies including black jack dealer named Frank Catton (the late great Bernie Mac) and Rusty Ryan (Pitt). They hatched a plan to steal money from two Las Vegas casinos during a big boxing match that could be worth more than $130mil. The casinos are owned by Terry Benedict (Andy Garcia) who happens to be dating Ocean’s ex-wife Tess (Julia Roberts). In order to get their plan rolling, they need some funding from Benedict’s rival Reuben (Elliot Gould). With backing from Reuben, Danny and Rusty went and recruit the rest of the team.

What I love about this film was the chemistry with each of the actors; they were all believable to me as a team on a mission. I especially love the bickering between the Mormon twins (Casey Affleck and Scott Caan). The script was well written and the actual heist was very clever and fun to watch. Unlike some other heist genre film, there were no twists or backstabbing from someone in the team. They finished their mission and everyone got paid.

After the disastrous Ocean’s 12, Soderbergh decided to fix his mistake from the second sequel and brought the team back for another heist in Vegas. In Ocean’s Thirteen, the team’s mission this time is revenge. After Reuben was left for dead by his former partner Willy Bank (Al Pacino), Danny and Rusty wanted to break Bank’s brand new casino. Unlike the second sequel where I felt the actors and filmmakers were having fun but we the audience were left out. In this film, Soderbergh brought back the fun and I had a great time with it; heck I think I liked it better than the first film. The heist itself was quite clever, instead of stealing the money from the casino for themselves, Ocean’s team decided to let everyone win big. Speaking as someone who goes to Vegas regularly and gambles there, I would have loved to be involved in this heist.

These two Ocean films aren’t the best in the heist genre but they sure are fun to watch. Maybe because it’s set in one of my favorite cities to visit Las Vegas, it’s the reason why I can’t get enough of these films.