For this month’s next review for Genre Grandeur – Heist Films, here’s a review of The Killing (1956) by Paul of pfeifferpfilmsandmegmovies 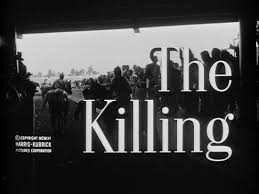 Stanley Kubrick’s The Killing is a gritty yet honest look at the world of crime, seen through the eyes of a group of average blokes, as they plan to rob a race track. The heist, masterminded by Sterling Hayden’s Johnny Clay, is complex but not too difficult to follow for the viewer, involving a lot of distractions and perfect timing on the part of all those involved. Though things seem promising given that some of the gang are working from the inside, the problem is that every detail is so meticulously planned there isn’t any room for mistakes.

As with all film noirs, matters are further complicated by an adulterous femme fatale (Marie Windsor) who has set her sights on obtaining the money for herself and her new flame. She contrives to get her husband, who is in on the job, to reveal some details about the heist, setting a chain of events in motion that will reap dire consequences for everyone involved. 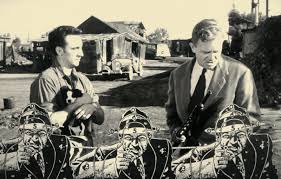 The Killing has a simple set up, but is still fresh in the way that the story is told. It may have been done to death over the last 60 years, but in this case the nonlinear technique doesn’t feel like a gimmick. Kubrick opens the film with the actual robbery taking place, then jumps back in time to follow the involvement of each individual participant.

The acting is universally excellent, with Sterling Hayden, Marie Windsor and Elisha Cook Jr. in particular shining. The film clocks in at a shade under 90 minutes, and  not a moment is wasted. It is perfectly paced. The Killing may not be the best heist movie out there, but it is a fantastic film and one of my favourites of the genre.