For this month’s next review for Genre Grandeur – Heist Films, here’s a review of The League of Gentlemen (1960) by Me 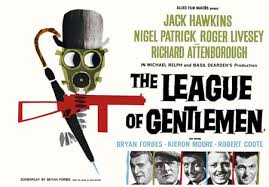 Brief Synopsis – A group of former army officers plan a daring heist of a bank in broad daylight.

My Take on it – I saw this movie last year for the first time when it was recommended to me by my good friend Emma. I immediately fell in love with it and knew I’d have the opportunity to see it again.

I love the concept of a bank heist from a military perspective because it is all planned out so precisely that you know that it’ll work but just not exactly how it will all pan out.

Top notch cast helps this work because they all work well together and you can feel the instant comradeship between these military men who don’t know one another.

The caper is planned out in a way that you are kept on the edge of your seat throughout.

The plot us very clever and the witty dialogue helps connect to the characters and their individual issues.

Bottom Line – Such an amazing concept for a heist because it’s all done with military precision throughout. Amazing cast helps make this work so well. Great British crime thriller that really keeps you on the edge of your seat the whole time. Very clever plot and dialogue helps keep it fun and light even during more emotional scenes. Highly recommended!

MovieRob’s Favorite Trivia –  In John Boland’s original novel, the robbers are inspired by a novel about a robbery – a real novel, Lionel White’s “Clean Break”. This book was the basis for Stanley Kubrick’s film, The Killing (1956). Bryan Forbes retained this idea in his screenplay, but made the novel an invented one with a different title (“The Golden Fleece”) with its authorship credited to a certain “John Seaton” – a pseudonym Forbes himself had used in his days as a feature-writer on the British fan magazine “Picturegoer”. He used this name again for the writer character played by Christopher Plummer in International Velvet (1978), which Forbes also directed. (From IMDB)