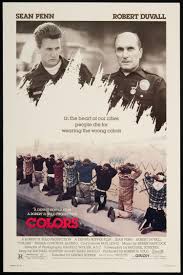 Brief Synopsis – A veteran street cop and his new rookie partner must deal with the rising gang warfare in L.A.’s inner city

My Take on it – The LA veteran and rookie cop thing has been done so much over the years that it no longer feels unique like it did back when this came out.

This is an extremely gritty and violent look at how confusing and difficult it became for everyone in inner city LA neighborhoods during the late 80’s where gang violence was on the rise.

This is true for both sides of the law.

I think that the choices of Robert Duvall and Sean Penn as the two partners is great because they both could easily show their differences when it comes to finding a way to stop the cyclical violence of the times.

I think that this film had a bigger impact on the audiences 28 years ago than it does now but it is still quite enjoyable to watch.

The soundtrack is quite good and predominantly features the song “Colors” by Ice-T.

Bottom Line – Gritty police film that really shows the confusion and difficulties of the inner city neighborhoods overrun by gang violence. Duvall and Penn are great as partners who have different ideas on how to fix the escalating violence. Has less of an impact now because the idea has been done again and again since but this was one of the first. Recommended!