For this month’s final review for Genre Grandeur – Heist Films, here’s a review of Inside Man (2008) by Drew of Drew’s Movie Reviews.

This month we had 13 reviews for GG:

In addition, I watched and reviewed 9 additional movies from this genre for my Genre Guesstimation series.   Two of them will be now included in my own favorites of the genre.

Let’s see what Drew thought of this movie: 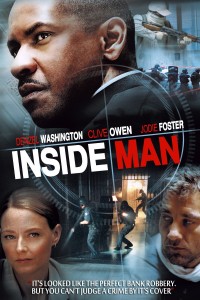 Hostage negotiator Detective Keith Frazier (Denzel Washington) gets called in when a Manhattan bank gets taken over by bank robbers, led by Dalton Russell (Clive Owen).  Russell claims to have planned the perfect heist and is always one step ahead of the police.  Meanwhile, the bank’s owner (Christopher Plumber) hires Madeleine White (Jodie Foster) to speak with the robbers and retrieve his prized possession contained in one of the safe deposit boxes.

For my entry in this heist-themed Genre Grandeur, I was going to pick my favorite heist film, Ocean’s Eleven, but didn’t choose it for two reasons: 1) I’ve already reviewed it (which you can check out on my site), and 2) I’m hoping someone else chooses it for their Genre Grandeur entry.  Instead, I opted to go with another one of my top heist films: Inside Man.  Inside Man may not have the same fun atmosphere as Ocean’s Eleven but what it does have is a heist where the audience only has what little information the main characters have.

Heist films can be told from either the robbers’ perspective or the police’s perspective.  Most often, whichever perspective the movie is told from, chances are that is who will prevail over the other. However, it is very hard to tell who will win the cat-and-mouse game in Inside Man.  The movie is told from the police’s perspective but the robbers always seem to be one step ahead of them.  As the audience, we are kept just as in the dark about the robber’s true motives as Detective Frazier (Denzel Washington) and the rest of the police force.  It really keeps you engrossed in the film and on the edge of your seat if you don’t already know what is coming.

Denzel Washington and Clive Owen are both fantastic in this film.  I wouldn’t say it is one of their best films for either actor but they are both able to take their parts and run with them.  I liked Owen better, but only slightly, because he had the calm and collected thief mastermind shtick down.  Washington and Chiwetel Ejiofor are so much fun to watch on screen together.  They make a perfect pair of detectives, easily bouncing off each other and clearly having fun.

This film utilizes a seldom-used technique of flash forwards.  These are used to get the some of the hostages’ perspectives about the bank robbery, as well as offer some exposition and even foreshadow events that are to come.   Like I said, this technique isn’t used very often in movies and I thought it was used to great effect here.  However, I wish it would have been used more because it only occurred a few times randomly in the middle act of the film.  It could have been used  more frequently to see more of the robbery from the hostages’ point-of-view.  Maybe it was a time constraint (the film runs over two hours) or Spike Lee not wanting to offer too much of a good thing and leave us wanting more.

I feel like Jodie Foster’s character wasn’t necessary to the plot.  She mainly served as exposition for what the robbers were going after and why it was so important to the bank owner, Arthur Case (Christopher Plumber).  This information could have been given through Case’s discussions with the police or by Owen’s character, since it is the item he is trying to steal.

I thought Inside Man was GREAT :-D. Washington and Owen steal the show with their performances in a film with many other big names.  The third main character, played by Foster, doesn’t feel completely necessary to the plot.  Flash forwards are a cool effect used in the film that I wanted to see more of.  Inside Man keeps you just as off balance as the other characters without becoming too complicated it trips over itself, creating a fantastic payout in the end.

Mitchell: Let me see your shoe.

Mitchell: ‘Cause I have never seen anybody put their foot that far up a guy’s ass.