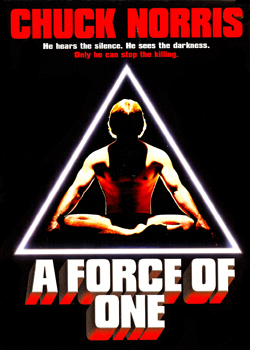 “See, it’s not that we don’t work the streets. It’s just someone’s working them faster.” – Dunne

Brief Synopsis – After a few of the detectives in the narcotics squad get killed by a martial arts expert, they decide to hire their own expert to train them.

My Take on it – I grew up on action movies of the 80’s and Chuck Norris predominantly was featured in many of them.

This was one of his earliest starring vehicles and it’s easy to see why he was always hired for his muscle as opposed to his acting abilities.

The storyline and dialogue are silly and come off as extremely corny.

The cops are a complete laughing stock here because of how stupid and incompetent they all are.

The few action scenes are quick but still well choreographed.

The most interesting thing about this film is the fact that the director had a soon to be famous step-son (see trivia below).

Other than that, I found it to be a complete dud.

Bottom Line – Hasn’t aged well at all. The story and dialogue are extremely corny. Hard to believe that the detectives are real because of their excessively gross incompetence. Even from the start Norris apparently was just muscle without any real acting abilities. Stay Away!

MovieRob’s Favorite Trivia – Director Paul Aaron was approached by American Cinema when the first director of the film, Ted Post, dropped out. Aaron had previously worked with the company on their (and his) first film A Different Story (1978). Although Chuck Norris was not a movie star at the time, Aaron was familiar with him as he had taken his kung fu obsessed stepson to see Enter the Dragon (1973). His stepson is Keanu Reeves.  (From IMDB)