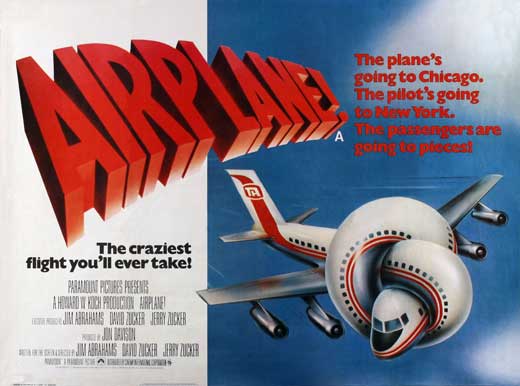 “Joey, have you ever been in a… in a Turkish prison?” – Captain Oveur

Brief Synopsis – Spoof of airplane disaster movies that places a former pilot with a fear of flying on an airplane that loses its crew.

My Take on it – This is a comedy classic that I grew up on and no matter how many times I see it, I am constantly amazed at how funny so many of the scenes/situations are even after 35+ years.

The jokes and gags are all perfect and even though I knew the punchlines, I couldn’t help but laugh at them over and over again.

They not only parody disaster movies and the number of movie related references are truly heaven for movie fans like me.

The choice of cast is great and they purposely chose some actors who were known purely as dramatic actors to play very comedic parts; Peter Graves, Barbara Billingsley, Robert Stack, Lloyd Bridges and Leslie Nielsen all showed talent for their new career paths. 🙂

I know it’s hard to believe that Nielsen was ever NOT a comedic actor, but this movie was actually his comedic debut and the world would never be the same again……

Bottom Line – Such a classic comedy that is still funny after more than 35 years. The jokes are all spot on and even after having seen this so many times, I couldn’t stop myself from laughing so hard. Great how they placed serious actors in comedic roles that would in some cases define their careers. Highly Recommended!

MovieRob’s Favorite Trivia – For the argument between announcers concerning the white and red zones at the airport, the producers hired the same voice artists who had made the real-world announcements at Los Angeles International Airport. At the real airport, the white zone is for loading and unloading of passengers only, and there’s no stopping in the red zone (except for transit buses). They were also married to each other in real life.  (From IMDB)