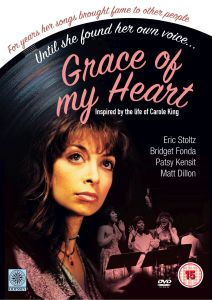 “Come on girls. This is supposed to be upbeat, not uptight. Get happy. ” – Cheryl

Brief Synopsis – A talented singer and songwriter spends the years helping write songs for others while neglecting her own potential in the business.

My Take on it – This is a movie that I’d never heard about until my friend Jane over at 500 Days of Film watched it during her Female director week.

I was actually quite surprised at how good it was especially since it was headlined by Illeana Douglas who usually isn’t considered an actress who can hold together a movie by herself.

This actually helped make the film feel more realistic because she isn’t considered to me a mainstream star.

The atmosphere of the music scene of the 60’s and 70’s feels quite spot on and we are truly transported into another time and place while watching this.

The film keeps a strong focus on the main character and we get to see and feel so much of what she experiences because it is all told directly from her perspective.

This movie is far from perfect, but it works quite well the whole way through.

Bottom Line – Very nice portrayal of the music scene in the 60’s and 70’s.  Douglas isn’t your typical leading lady which makes this work in an even more realistic fashion. Some great music with lots of fun cameos from popular actors.  Keeps a strong focus on the main character’s life ups and downs as we get to see it all from her perspective. Recommended!

MovieRob’s Favorite Trivia – The soundtrack song “God Give Me Strength” was composed by Burt Bacharach and Elvis Costello under curious circumstances. Since both men were on opposites sides of the Atlantic (US & UK), the song evolved over the course of several long-distance calls and alternate exchanges of recorded snippets left on answering machines.  (From IMDB)