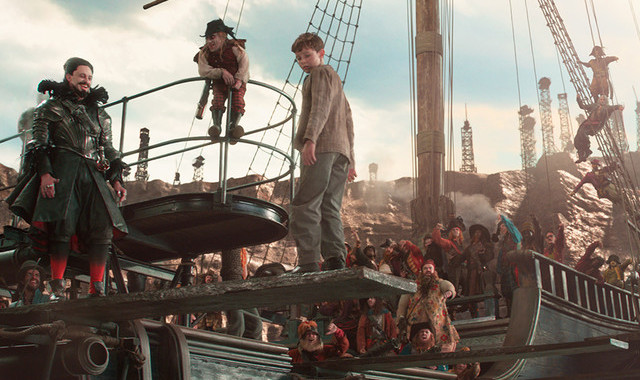 For this month’s first review for Genre Grandeur – Adventure Films, here’s a review of Pan (2015) by SG of Rhyme and Reason

Thanks again to Damien of Riley on Film for choosing this month’s genre.

Next month’s Genre has been chosen by Summer of Serendipitous Anachronisms She has chosen quite a unique genre and we will be reviewing our favorite Derivative Work Movies.

Please get me your submissions by the 25th of June by sending them to derivativesummer@movierob.net  Try to think out of the box! Great choice Summer!

And some are classic; others…no.

Some storytellers work their art

Into their every reader’s heart.

Their tales are loved by faithful fans,

Whose pocketbooks sustain the plans

To carry on the tale somehow

With prologue yarns and afterthoughts,

With remakes that keep getting made

Until the fans are more dismayed

Than thrilled at how their favorite tales

Perhaps have gone right off the rails.

While some are classics, others…no.

To judge the classics and the new.

Pan was one of 2015’s biggest commercial disappointments, but like last year’s other huge flop Fantastic Four, I did not find it to be as inherently awful as some of the reviews made it out to be. Pan is the kind of special-effects-fueled reimagining of a classic children’s story that seems to be all the rage lately, just this time without Disney’s involvement. Disney doesn’t have exclusive rights to J.M. Barrie’s beloved story, and just as Spielberg looked to Peter’s future in Hook, Pan looks back to his origins.

I won’t lie; Pan definitely has problems. Right from the start, young Peter (Levi Miller in a competent first role) lives in an orphanage, oppressed by one of the most tiresome of clichés: the cruel nun. Film’s opinion of nuns has certainly changed since the days of The Sound of Music; here, Peter’s caretakers are as wicked and grotesque as possible, not caring if their charges live or die and even apparently selling them off to otherworldly pirates. How else is Peter to reach Neverland, I suppose? Once he gets there, he is enslaved with his fellow orphans by Hugh Jackman’s over-exaggerated Blackbeard; meets earlier, somewhat friendlier versions of James Hook (Garrett Hedlund) and Smee (Adeel Akhtar); and embarks on a familiar prophesied-savior adventure. The casting has been widely criticized, but I didn’t mind non-native Rooney Mara as Tiger Lily or even Jackman’s villain, the second version of Blackbeard to be obsessed with obtaining eternal life (after Ian McShane in Pirates of the Caribbean: On Stranger Tides). What pulled me out of the movie every time was Hedlund as Hook. Every time he spoke, he had a forced lilt in his voice, as if he were trying to sound sarcastic or doing a poor Jack Nicholson impression. A better actor would have drastically improved the movie as a whole. Not to mention, the inclusion of Nirvana’s “Smells Like Teen Spirit” is one of the strangest, most anachronistic creative choices I’ve ever seen.

All those negatives notwithstanding, I still enjoyed Pan. Its vision of Neverland is vibrant and colorful but not gaudy like Tim Burton’s CGI Wonderland, and its special effects are frequently wondrous. Two visually stunning flashbacks are depicted not in typical live action, but with fluid re-creations in wood and water. The only out-of-place element is the horribly fake-looking Neverbirds, but all the other effects ring true, from the mermaids to the crocodiles. The best scenes are those with the flying pirate ships, which oddly don’t seem to require fairy dust to levitate; from an escape swooping through war-torn London to the crystal-surrounded final battle, every scene with the ships is exhilarating.

While undoubtedly flawed, I found Pan to be an entertaining reimagining of how Peter Pan came to Neverland, even if it turned Hook into a good guy with no indication as to how he eventually became the villain we all love to hate. In these days of edgy remakes, it’s also admirably family-friendly for the most part, even sticking to words like “heck” and “darn.” My VC, on the other hand, has a deep and abiding love for the original Peter Pan story and felt this most recent take bordered on the sacrilegious. So many changes, big and small, bugged her that she refused to even finish the movie. While it’s hard to imagine anyone loving Pan without reservations, I found enough redeeming qualities for it to still be worth watching. But I’d sooner watch Hook any day.

Best line: (Tiger Lily) “Home’s not where you come from. It’s where you make it.”