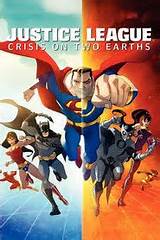 “There is a difference between you and me. We both looked into the abyss, but when it looked back at us, you blinked. ” – Batman

Brief Synopsis – When a superhero from an alternate Earth seeks help from the heroes of our Earth, they work together to stop a crisis that would destroy multiple Earths.

My Take on it – As a fan of the DC comic universe for over 30 years, I’m quite familiar with the problems and issues that made them decide on creating multiple Earths and discussing the ideas of a multiverse.

This film taps into those ideas and explains it in a very simplistic way for those unfamiliar with the concept.

The fact that they could create a different Earth featuring alter ego’s of all of the heroes and villains that we love but switch their affinities towards good or evil works really well because it helps create even more interesting and unique characters for us to follow.

As always with the WB/DC productions, they have a wonderful voice cast.  Mark Harmon, William Baldwin, Chris Noth, James Woods, Brian Bloom, Gina Torres and Bruce Davison are all wonderful.

All in all, the story is fun to watch unfold and keeps things interesting throughout.

I, for one, would love to see more tales take place in this world with these very interesting characters, but I doubt that they would be popular enough for most people.

Perhaps a prequel would work which could give us the full details of what happened to all the original heroes populating this alternate Earth.

Bottom Line – Love the use of the multiverse and the simple explanation of how it works. Seeing heroes’ and villain’s alter egos on opposite sides of the law made things so interesting.  Great voice cast as always with the DC/WB productions. Great and fun story that works quite well. Recommended!

MovieRob’s Favorite Trivia – Originally titled “Justice League: World’s Collide”, Dwayne McDuffie’s script was commissioned for a planned direct-to-video feature in 2004 meant to bridge seasons two and three of Justice League (2001). However, due to a tight TV schedule and various other problems, it was not produced then. (From IMDB)

One thought on “Justice League: Crisis on Two Earths (2010)”