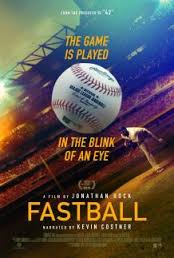 “Baseball in the 21st Century. It is a game of specialists. A game molded by technology, driven by data and statistics. It’s a game managers try to win by predicting what can only be guessed at, by controlling what can only be hoped for.” – Narrator

Brief Synopsis – This documentary tries to answer the age old question of which MLB pitcher has thrown the fastest baseball ever.

My Take on it – As a fan of baseball, I wanted to see this as soon as I heard about it because the question it asks is such a fascinating one.

They present this film in a very entertaining way and I was hooked right from the start.

This film is filled with interviews with so many different people related to the subject matter that I was constantly amazed with each and every interviewee as they popped up; sports columnists, MLB Hall of Famers, current and former players and some geeky scientists that are apparently also fans of baseball since they tried explaining their methods for measuring the fastballs of all time.

Each of them give their own perspective and opinion on the question posed and their reasonings were vastly different from one another giving us such a large scope of players to think about.

It was really great seeing the footage of some of the fastest baseballs ever thrown during some of the best duels in history.

I’m am far from being a fan of science, but I found the explanations of the scientific methods used here to be quite interesting in the quest to give us a true answer to the question posed.

Bottom Line – Such a great idea that is presented in such an entertaining way. Loved seeing the interviews with scientists, sports columnists, MLB Hall of Famers and current and former players who each gave their own unique perspective on the question posed here. Great seeing the footage of some of the most fascinating baseball duels in history. Despite not being a big fan of science, I really enjoy the scientific methods used here to try and give us a real and truthful answer. Highly recommended!

MovieRob’s Favorite Trivia – As explained in the fascinating new documentary FASTBALL, that seemingly arbitrary distance is actually a nearly perfect balance point between the two players on either side of the ball. From that distance, a pitch thrown as fast as a human being can possibly throw – somewhere just above 100 mph if you are an elite pitcher – is delivered at a speed that is right at the threshold for how quickly the most talented of hitters can see, process, and react to the pitch. At that highest level of execution, batters and umpires alike swear the ball “rises” as it reaches home plate – something that physics tells us is impossible. (From Fastballmovie.com)