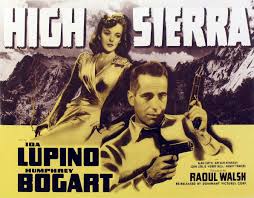 “I wouldn’t give you two cents for a dame without a temper. ” – Roy Earle

Brief Synopsis – After being released from prison, a professional thief joins a very inexperienced crew for a new heist

My Take on it – I had hoped and expected this film to be much better based solely on the fact that Humphrey Bogart stared in it.

Unfortunately, he didn’t only make great films and IMHO this is not among the list of the winners.

The story and plot aren’t really thought out well enough to keep us interested all the time.

The acting is quite wooden and we end up not caring for any of the characters because none are sympathetic at all.

The use of a dog to try and grab out heartstrings is an interesting tactic, but since it feels like a regular Hollywood ploy, it just doesn’t work.

The idea was possibly to add a canine cutie in order for us to actually find one character somewhat likeable.

Some of the action scenes are quite impressive for the early 1940’s and knowing that this movie was one of the first uses of location shooting for a thriller makes it at least look nice.

Bottom Line – Not among my favorite Bogart films. The acting all around felt too wooden and I didn’t care for any of the characters at all. The dog seems like it was used to try to get us to like some character and even that is iffy.  Nice action sequences and real life location shoots that look amazing helped bring the stars out of the studios for years to come and find real locations to shoot from.

MovieRob’s Favorite Trivia – When Pa first meets Roy at the gas station, Pa says, referring to an accident he almost had, “A jackrabbit jumped in front of the car and I kinda lost my head.” Director Raoul Walsh lost an eye a dozen years earlier when a jackrabbit jumped through the windshield of the car he was driving. (From IMDB)