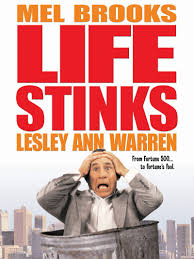 This is the first of 3 reviews that are a part of the Mel Brooks Blogathon being run by Louis (Film Score Hunter) over at The Cinematic Frontier.  Tnx for letting me participate!

“They force me to live in the crap, and now they’re taking the crap away? No! ” – Goddard Bolt

Brief Synopsis – A billionaire makes a bet with a rival businessman that he can live in poverty in the slums of New York for 30 days in order to win full ownership of the property in order to rebuild.

My Take on it – This is a film that I never saw before despite being quite a big fan of some of Brook’s older spoofs.

Unfortunately, when comparing this film to Blazing Saddles (1974) or to Spaceballs (1987), it isn’t funny at all, but this is not an outright spoof, and the social message that Brooks tries to convey is presented to us in an effective way that makes us think about the issues that are still relevant today 25 years later.

Mel Brooks is the lead here and he does a wonderful ob playing the snooty snob and presents the character’s transformation perfectly.

The characters are all quirky as expected from a Brooks film and we don’t also laugh at what they say or do, but actually how they say it or do it because of what they are suppose to represent.

This is far from being one of Brooks’ best films, but it’s still interesting to watch due to its message despite feeling quite average.

Bottom Line – No as funny as most of Brook’s earlier films, but that’s mostly because this one has a social message that shows it is mostly serious and is even still relevant 25 years later.  Brooks plays the rich snob quite well and does a fine job in the title role during his transformation.  As with most Brook’s films, we get to meet some really quirky characters who make us laugh not necessary by what they do, but rather for what they represent.  Not one of his best, but a good social message nevertheless.

MovieRob’s Favorite Trivia – This is the last film directed by Mel Brooks in which he also stars in the leading role. (From IMDB)